Live photos of the BlackBerry Bold Touch have given tangible form to the leak from late January. The photos of the touchscreen-bar with QWERTY keyboard reveal a carbon back panel instead of BlackBerry's usual faux-leather back.

We first heard of the Bold Touch when a press photo leaked back in January, and later on some additional leaked slides confirmed it and detailed some high-end specs. Some of those have been confirmed now as well, like the 2.8" VGA touchscreen and the BlackBerry OS 6.1.

The BlackBerry Bold Touch (a.k.a. Dakota, Montana) also packs a 5MP camera (which was supposed to record 720p video, but that's unconfirmed), 8GB of built-in memory (6.5GB of which are users accessible), an accelerometer and a proximity sensor. 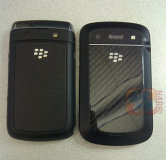 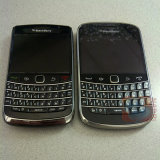 Anyway, the BlackBerry Bold Touch is reportedly superior to the Torch when it comes to touch experience. The phone has an all metal frame and a carbon battery cover. The leaked slides put the thickness of the Bold Touch at 10.5mm though that is yet unconfirmed.

The battery of the Bold Touch

The slides also mentioned dual-mode connectivity (that is both CDMA and GSM 2G/3G) along with a 1.2GHz processor, but those specs haven't been confirmed as well but corroborate nicely with all the other BlackBerry leaks this year.

I love dis device,it won't be a bad idea owning one as my 4th blackberry phone,thumbs up RIM.

I like how the trackpad is lit up.. well done RIM