The Meizu m3 note was made official last week, and it went on sale through flash sale model in the company's home country of China yesterday. Meizu took no time, and has already released the official sales figures for the device, revealing that it sold 100,000 units in the first 7 minutes of the sale. 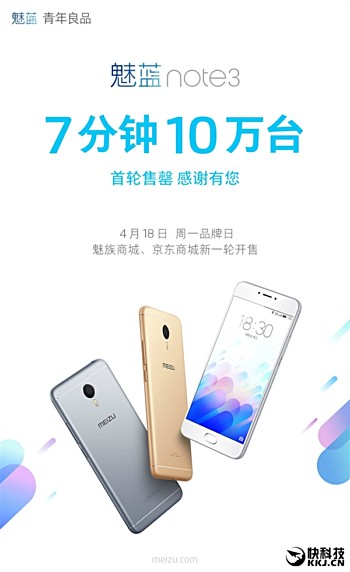 That's definitely an impressive number for a company that sold a total of around 20 million handsets last year. Meizu also revealed that the next flash sale for the device is scheduled for April 18, which is coming Monday.

In case you don't already know, the m3 note starts at $125, for which you get the 2GB RAM version. The 3GB version, on the other hand, sets you back $155. The device is powered by a MediaTek Helio P10 SoC, and sports a 5.5-inch FullHD display. In terms of camera, it features a 13MP rear unit and a 5MP front shooter. It packs in a large 4,100 mAh battery.

why this phone on sale? when it availabe please give reply

Meizu m3 note is now launched in India on Amazon.in and users can buy the phone via Flash sale.

I cant find this anywhere in china :/ i am going to buy 3 pieces of this phone.