First Nokia 2.4 images show off a new fingerprint reader on the back

The Nokia 2.4 (aka Wolverine) may be unveiled at IFA later this week, along with the 3.4 and several mid-rangers. The 2-series model will have a design very similar to that of its predecessor, the Nokia 2.3 as you can see in the render below shared by @evleaks.

The back does show one new feature – the fingerprint reader. The 2.3 phone had only basic face unlock. The model number, TA-1270, has appeared in FCC docs, which revealed that a battery upgrade is in order too – from 4,000 mAh to 4,800 mAh. The phone will still come with a 10W charger, though. 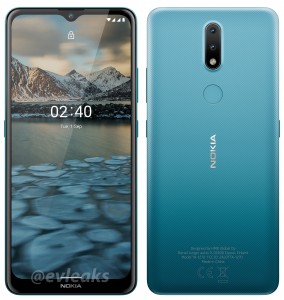 The dual camera looks unchanged and indeed according to rumors, it will have the same 13MP main and 2MP depth sensors. The 5MP cam in the teardrop notch on the front should remain unchanged as well.

Based on those same rumors, the Nokia 2.4 will have a larger display than its predecessor, going from 6.2” up to 6.5”. And we’ve seen Geekbench result, which show a MediaTek Helio P22 chipset with 2GB of RAM and 16GB storage. The phone will allegedly be available in a 3/32 GB configuration as well.

Besides the 2.4, HMD is expected to unveil the Nokia 3.4 as well as the Nokia 6.3 and 7.3. However, the company is yet to officially confirm its attendance at IFA or set a date for its event so this may happen at a separate event.

Well here is another generic looking waste from HMD

And now I compared it. You pulled me into your trap :)

Alright, now you made me understand what you meant. Your first comment didnt. Ok. Maybe 2gb of ram wont let you play world of tanks all that good, but with 25 frames, it will be ok. For 80 euro. Also I found the motorola one macro at 125 euro here...