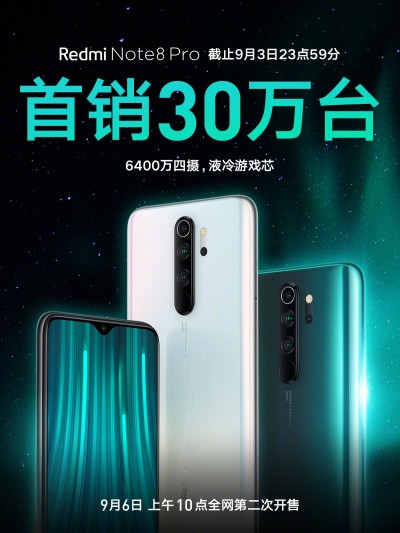 Last week Xiaomi introduced the Redmi Note 8 Pro with a 64 MP main camera. The device arrived for sale this week and it already smashed the brand’s record for the first sale - it pushed over 300,000 phones in its first day on the market.

For comparison, the predecessor Redmi Note 7 saw “only” 100,000 phones sales on the first day, even if they sold in under 10 minutes.

The Redmi Note 8 Pro is truly an intriguing phone - the camera is one thing, but it also has Helio G90T chipset, octa-core CPU, 18W fast-charging for the 4,500 mAh battery and pretty much everything else you might want from a phone that costs CNY1,399 (that’s $200 or €180).

Both phones are currently sold only in China - Xiaomi India director Manu Kumar Jain announced the Pro version will hit India and other global markets at least eight weeks after the official launch, masking it behind the slogan “8 weeks for the Note 8”.

Only two competitive chips and one refresh p60, p70 and G90T (this last one drops performance at 730 sub level) and it is that competition? Snapdragon chips were better even before mediatek gots strong just look for 625 and 636, beats 6 chips p20, p2...

People will buy any old junk these days....