The Samsung Galaxy Note 4 went earlier on sale than originally planned in order to compete with the iPhone 6 Plus. However, it seems that Samsung's rush has resulted in some defective Galaxy Note 4 units, a report from South Korea suggests.

As you can see, there's a gap between the Galaxy Note 4's 5.7" QHD Super AMOLED display and the metal casing next to it. The report suggests, the gap is wide enough to fit 2 sheets of A4 paper or a business card. 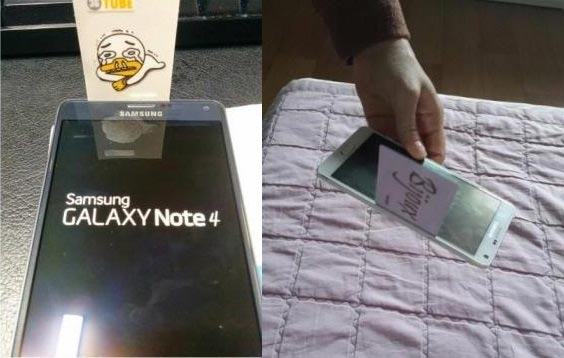 There's no official comment from Samsung regarding the mishap of the number of affected Galaxy Note 4 customers. We guess if there are more such cases, we'll be hearing from the company sooner than later.

In South Korea a SIM-free Galaxy Note 4 will run you at approximately $920, which is the cheapest of any Note phablet so far. Pre-orders of the Galaxy Note 4 are already underway in the US. There, the phone is confirmed to launch on AT&T, Sprint and T-Mobile on October 14.

Just looked at four different Note 4 devices and I can confirm that this is not an issue. The gap is NOT as thick as a bussiness card. Its about 0,1 mm thick (about 1 thin notepad paper thick) and 0,3-0,5 mm deep. It's not visible if you don't s...

lol i'm guessing they're expecting repairs already? it's a massive gap and no it's not normal to have such a big gap, uneven gaps too apparently. doesn't have the finesse of the iPhone 6.