We’ve been hearing about a Redmi smartphone with Snapdragon 855 chipset, and today a leakster from China revealed some more specs about the device. According to the Weibo user, the upcoming flagship will be coupled with 8 G B RAM and will have a triple camera with 48 MP main shooter. 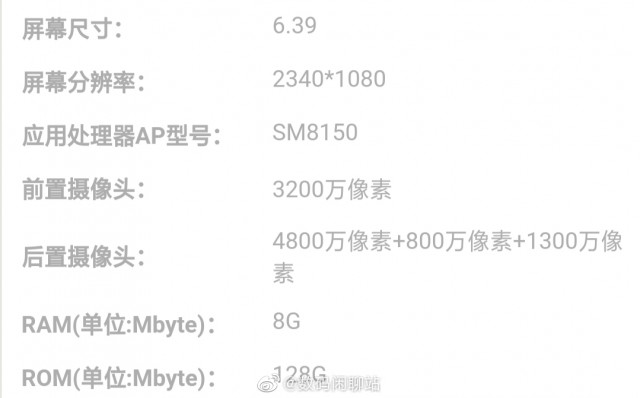 Even if your Chinese is non-existent, the list is pretty much self-explanatory - the Redmi phone will have a 6.39” screen with a 32 MP camera on the front, although we’ve seen spy shots of a phone with an elevating mechanism for the front-facing shooter. Whether this is the same phone we are yet to determine.

While the main setup is coupled with what appears to be the same sensor as in the Redmi Note 7 or Redmi Note 7 Pro, this time it will be coupled with an 8 MP secondary shooter, likely a telephoto lens, and a third 13 MP camera, most likely with a wide-angle aperture. The phone is expected to arrive as early as next month.

Most people like big phones especially in India since we are tall and well built and anything less than 6.3" is too small.

Great, very great, I was thinking of Mi A3 Android one but I think this one will rather be my next phone for one year. Very great specs and I believe great good price too to go with it. I swear this will be more popular than the Pocco F1. Fans will b...