According to analytics firm NPD, Android managed to steal the top spot from iOS by a sizable amount following Q4 last year, making Google's mobile OS the more popular choice amongst newcomers to the smartphone market.

Between October and December 2011, US buyers deliberating over which device would take their smartphone virginity, opted for an Android-based phone rather than a member of the iPhone family. 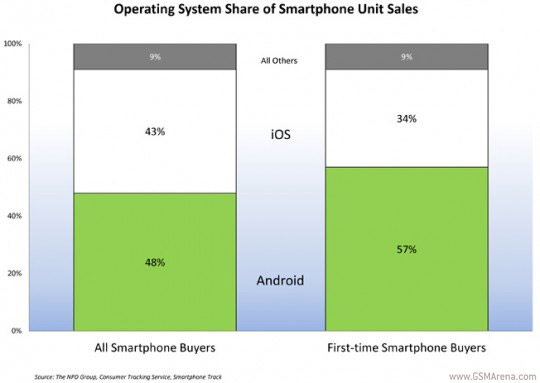 57% of first-time buyers picked up a droid, followed by 34% joining the Apple family and a further 9% taking up a smartphone OS of a different flavor entirely.

Smartphone buyers in general, across the same time frame, helped narrow the gap between the two front runners, but Android still came out on top with 48% of the market over the 43% belonging to iOS users.

These numbers aren't that astonishing when you consider the market. First time buyers are more likely to put extensive thought into their first smartphone and with the plethora of form factors and brands out there running Android, the iPhone might not seem like the obvious choice for everyone.

Another aspect to consider is reach; whilst the iPhone is now comfortable running on three of the top US carriers' networks, Android devices feature on all four of the leading names.

That being said, these findings go against previously anticipated figures, which pinned iOS as top dog following the launch of the iPhone 4S, which probably account for the narrowing gap in general sales during this time frame.

Android continues to grow in the US, despite many already proclaiming its over-saturation in the market. Between both Apple and Google, they have accumulated the lion's share of sales, leaving only the scraps to the likes of BBOS and Windows Phone, but all good things must come to an end; the question is, when?

Which mobile OS (and mobile device) do you think is best suited for newcomers to the smartphone market and why? We'd love to hear your thoughts in the comments.

Android is cheap,and that's why it sells crazy.iOS brought something new to the people,smooth and sleazy.But not anyone has deep pockets.

I work for a mid-sized company, it was last year we dumped all the blackberry devices and moved to iPhone and let me tell you it is rock solid!... we use iPhone all across our organization about 2.5 - 3k iOS devices. we choose this after going throug...