It all began with the announcement of the world’s cheapest smartphone - the $4 Freedom 251 made in India. The company behind the project - Ringing Bells - received a huge coverage in the media.

The first odd thing to happen was the change of the design shortly after the announcement. Few people noticed this, but it happened - Ringing Bells swapped the picture of the Freedom 251 on their website from an attractive phone with thin bezels to a more generic 4" brick with rather thick bezels and just a single key under the screen.

But hey, this thing is supposed to cost $4, so nobody cared how the phone looks like.

Recently, media representatives received prototypes of the phone, which raised more questions instead of building more hype. The shipped phones turned out to be Adcom phones with their logos covered by simple correction fluid. Adcom is a Chinese company, and they are currently selling this model on the Indian market for about $50. Not only is it a rebranded device, but it's certainly not the Made in India phone, which Ringing Bells promised.

A slightly less disturbing fact was the demo phone software - the UI icons were entirely identical to those found on the Apple iPhone. So overall, the local media were looking at a cheap Chinese iPhone lookalike device and not an original product. 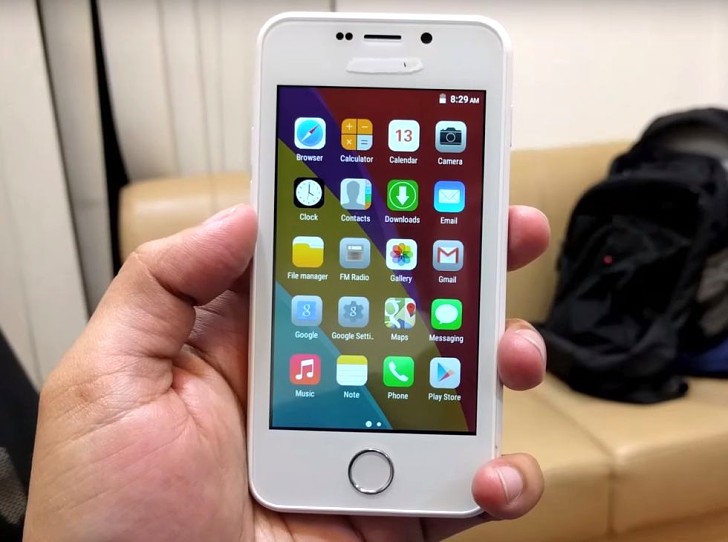 All those facts raised more than one eyebrows, and the Ringing Bells's CEO had to take time to answer some of the pressing questions regarding their product.

It turned out that Ringing Bells indeed used an Adcom phone as a demo unit but only did so in an attempt to gauge the reception by the audience. The Freedom 251 smartphone will supposedly have the same specs as this Adcom phone though the external design might differ in the final version. While plausible, that certainly is not the legitimate way of going about creating a new product. If the company used the journalists and the public as a research focus group for straightening up their product design plans, how did they come up with the pricing in the first place without a clear product plan?

As for the pre-installed software on the phone, the Ringing Bells CEO shared that they've had plans to change the UI with a custom design of their own anyway.

Essentially, users who registered to get the device, still don't really know what their device or the software on it will look like.

Another red flag is the fact that the Ringing Bells CEO claims they are a registered Android Partner, although the company is not on the list. They have not submitted a phone for certification within the BIS (Bureau of Indian Standards) either. So how come are they selling one online?

So if the Freedom 251 is merely at its early concept level, this all begs the question whether users will get the promised device at all. It also raises questions about the viability of the Ringing Bells business model, and the whole thing is increasingly starting to look like a sham - or a mere publicity stunt if nothing else.

In just two days the company has received more than 60 million registrations and has since stopped accepting new ones. Ringing Bells reportedly didn’t anticipate such an interest, and allegedly plans to work on fulfilling the first 30,000 orders and continue with their campaign only after that.

Meanwhile Indian companies have asked the Telecom Ministry to check the Ringing Bells credentials. The company would certainly come under scrutiny, and the authorities already feel pressure to look more closely into how this unbelievable offer is made possible as current estimates from people in the know suggest the minimum per-unit production costs for a phone in China are no less than $30.

Whatever the outcome of the government checks may be, one thing is for sure - at this stage, the Freedom 251's future is unclear. It's still a concept phone which may not see a market launch anytime soon. For now, you'd be better off spending your money elsewhere on a product from a more reputable phone brand. You know, sometimes when a thing sounds too good to be true, it probably is.

i want this mobile 10 pec ,i m from Pakistan