Smartphone and tablet processors are just about entering the dual-core stages of their evolution and Freescale wants to join the party. Not only this, the company is even willing to throw a quad-core CPU our way just for the fun of it.

Freescale just announced a trio of new mobile processors, suitable for use in Smartphones, Tablets and eReaders. The three versions of the i.MX 6 CPU are called Solo, Dual and Quad and come with one, two and four Cortex A9 cores respectively. Each of the cores can be clocked at up to 1.2 GHz. The level 2 cache isn't quoted for each of the CPUs but Freescale says it reaches 1 MB (presumably on the quad-core unit). 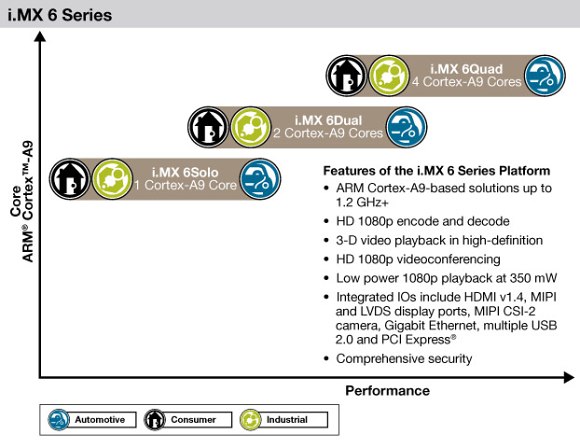 Still each and every of the i.MX 6 processors is said to allow full HD (as in 1080p) video decoding and encoding. There's also support for HDMI v1.4 and multiple USB 2.0 ports. The stereoscopic image sensor support allows for 3D imaging, provided that someone builds the right camera module for the task.

Freescale plans to start sampling the new CPUs later this year, which isn't nearly as specific as we hoped to get. Anyway we don't expect to be seeing one of those babies on an actual tablet or smartphone before the next holiday season.

I don't know about this... Sounds good all that performance and power coming from all those cores, but the batteries on todays devices don't last long enough, so if it goes on like this, they will last even. Compare Mobile Phones

we need batteries with last longer:Then only we can Enjoy that kind of Tech..........

Do you have idea what brand of celphone can run this processor? B'coz im planning to buy Samsung galaxy tab so if samsung have plan to change thier processor its better to wait.