The merger of Android and Chrome OS has long been discussed, but now we’re seeing the first real step towards that goal - Google announced that any and all Chromebooks sold from 2017 onwards will supports the Google Play Store.

That means you can just grab any new Chromebook and enjoy your favorite Androids apps - productivity apps or (let’s be honest) Hearthstone, Minecraft, Clash of Titans and other games. Google even takes things further and has partners working on devices “specially designed for Play.”

Sure, some current models already do, but not all of them and getting the right one required some research. The following devices will be supported with version M53 on the developer channel: ASUS Chromebook Flip, the Acer Chromebook R 11 and the latest Chromebook Pixel. Here’s the full list (only those three for now, but will be updated as new devices gain access to the Android app store). 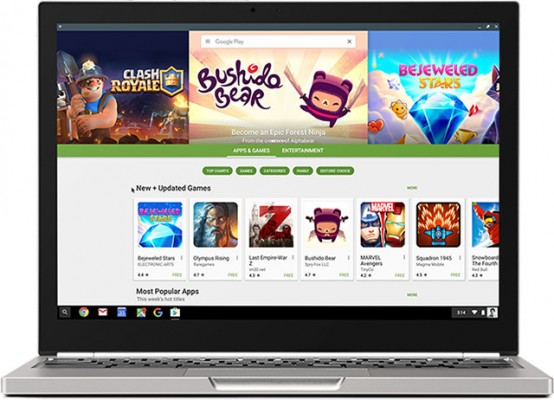 It’s not clear if Chromeboxes and Chrome-on-a-stick devices will also run Android (those will make great HTPC’s with Kodi for Android).

Even if it’s just laptops, according to IDC Chrome OS is the second most popular PC operating system in the US - ahead of Mac OS and (obviously) behind Windows. With the explosion of available apps and games for the platform, Apple may be sweating (not to mention the displease caused by the new MacBook Pro).

That's because they're fanboys and they don't have a valid argument to support their decision. So their preferences have no meaning to the real world.

No need Chromebooks, my tablet is doing fine.

That's your opinion. Go ask around and there are a lot of Google fanboys that simply refuse anything Microsoft, especially those into tech.