It's that time of the month again, folks. Google has just updated its monthly Android platform distribution chart, and there's some good news in the updated data. Android 2.2 Froyo, a version launched in May 2010, is finally installed on less than 0.1% of devices in the wild at the moment. That's the threshold under which a version isn't shown in the chart. So it's time to say RIP Froyo.

The oldest iteration of Android that still has over 0.1% market share thus became Gingerbread, with 1%, followed by Ice Cream Sandwich with 1.1%. Thankfully their numbers are consistently declining from month to month - in December they were both at 1.2%. 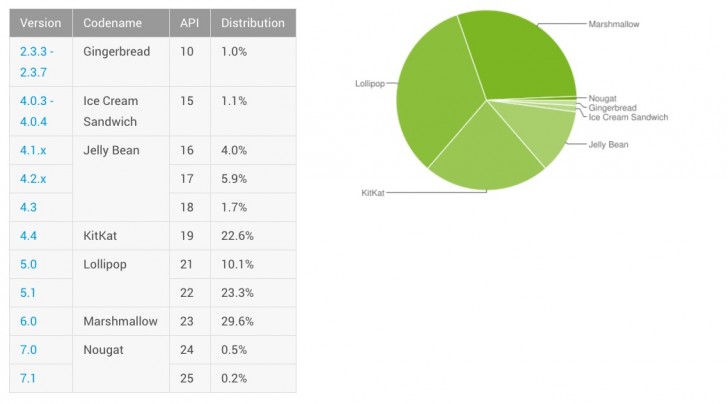 The latest variant of Google's mobile OS, Nougat, has only captured 0.7% of the market at the moment. That is obviously appalling four months after its initial release, but also expected given how slow the adoption is for every new Android version.

Lollipop is still the most used iteration, with 33.4% market, followed by Marshmallow with 29.6%. Then comes KitKat which is on 22.6% of devices, while Jelly Bean has 11.6%. Aside from Nougat and Marshmallow, all the other releases have seen drops in their market share.

I dont trust Motorola anymore ever since Lenovo took over. Lenovo planning to put their Vibe UI skin on Moto phones. This plan is of course for China market.

Well I would like to go with Motorola and One Plus that has better Open Source availability and build too.

And thats why we buy Xiaomi. So we can root it after 2 years. Whatever phone you buy the android update only for 2 years. Then there will be zero update or just occassional security patch update. Or buy a new phone after 2 year. Isnt that hard. Sell ...