The Dell Streaks will be jumping from the past to the future - they will start ditching Android 1.6 Donut and going straight to 2.2 Froyo (sorry, Eclair) very soon. Along with the usual updates that come with Froyo, the Streaks will receive a new UI as well. 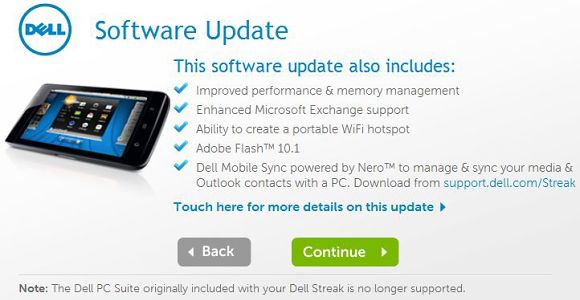 Dell will start rolling out the Android 2.2 Froyo update in the UK by the end of November and move on to other regions from there. It won’t be available for all regions simultaneously, instead it will be done in stages. Performance improvements, Flash 10.1 and Wi-Fi hotspots are of course on the list of new features, but there’s the new Stage UI for the Dell Streak as well.

We first heard of Stage UI when Dell’s droids were announced. Now the new interface will be replacing the current custom UI of the Streak. Here’s a 7 minute video of Android 2.2 Froyo with Stage UI running on the Dell Streak (check out the portrait mode).

Anyway, Dell will be offering a backup & restore app so that you can preserve your data after the updates. A notification should appear right on the phone once the update is available for your Streak. From Dell's Facebook posts it seems like the update rollout might well continue into December, so it will take a while before it gets everywhere.

An interesting rumor is that the Dell Streak (new units that sell directly with Froyo) will be available in new colors too. It's not clear what those colors will be - red, white, black?

is now can record HD video 720fps in froyo?

we had an official Eclair 2.1 update for the streak but dell took it down because they left it prerooted