Aside from the F9/F9 Pro that the company has been teasing a lot recently, Oppo is also gearing up to launch yet another smartphone in the coming weeks. This one will be called either R15 Neo or AX5, depending on market. Today what is purported to be a full spec sheet for it has been leaked.

The R15 Neo (AX5) will be lower-end than the F9/F9 Pro in most regards, but it's an interesting handset nevertheless, packing a huge 4,230 mAh battery and the Qualcomm Snapdragon 450 chipset, paired with either 3 or 4GB of RAM and 64GB of storage. 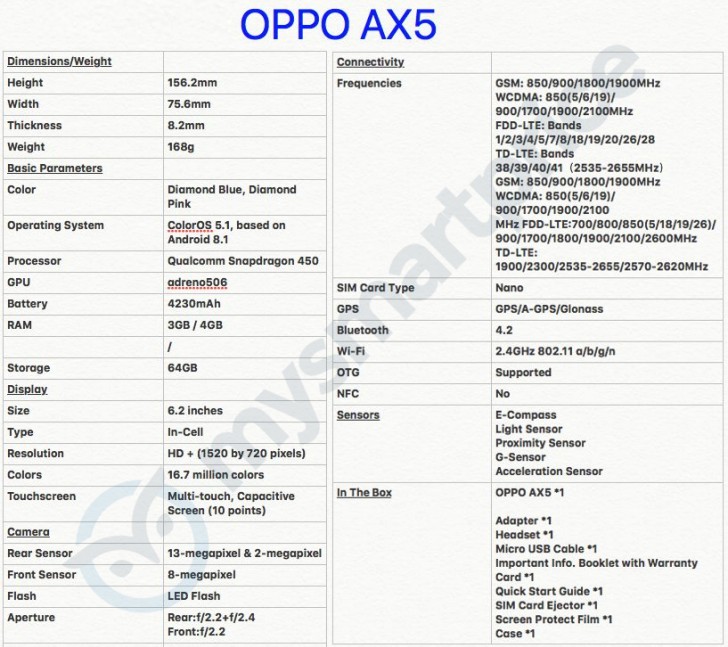 The phone will have a 6.2-inch 720x1520 touchscreen, and given the very tall aspect ratio we assume a notch is inevitable. On the rear you get a dual 13 MP f/2.2 + 2 MP f/2.4 camera system, with the secondary sensor clearly being there only to capture depth information, making bokeh shots possible. Selfies will be taken care of by an 8 MP snapper with f/2.2 aperture.

It's unclear when the R15 Neo (AX5) will become official, or how much it will cost, but now that it's started leaking expect that information to arrive soon.

End of the day all three brands have one parent company- BBK.

just for one, Oppo and Vivo are not siblings, Vivo's founder is a formerly from Oppo and decided to make his own brand which currently doing good, IMO, better than Oppo

Too much electronic junk because of this crappy company... Even their flagship didn't find the real X to match iPhones!