We've been seeing leaked photos of a Samsung phone in launch box (basically black blocky plastic to conceal the final design), supposedly the Galaxy Note III. There's a new one out today, next to an old Nokia and another Samsung launch box.

We dug through our database and found the Nokia phone to be the 1202, which measures 105.3mm tall. After straightening out the photo a little, we used that to measure the diagonal of the screen on the big device and came up with 6.3". So, this is most likely a Galaxy Mega 6.3. 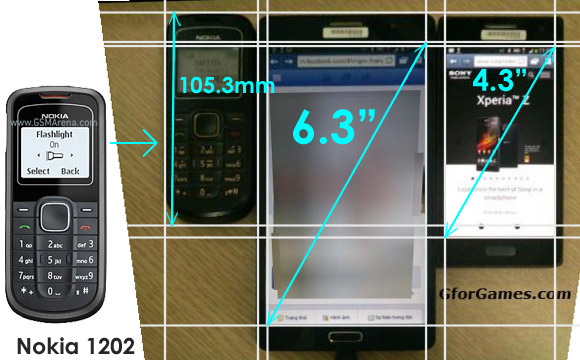 We measured the smaller device too and found that its screen diagonal is 4.3", most likely the Samsung Galaxy S4 mini. Both the Galaxy Mega 6.3 and Galaxy S4 mini are official, so this image shows nothing new.

We're still waiting on the real Galaxy Note III. Samsung has a "Galaxy and Ativ" event coming up on June 20, but more realistically it will debut in September at the IFA event just like its predecessors.

Just for display size alone? You have no other thought? Not to mention neither have been released yet. Nothing is official, and you don't know what to expect truly for either yet. Either way they will both be great devices. Top dogs for su...

Disappointed. I thought Note 3 will be as big as Sony Xperia ZU's 6.4-inch. Then I will be buying Sony instead of Note 3