Verizon Galaxy Nexus finally on sale, costs $299.99 on a contract

It’s finally happening, guys! The Samsung Galaxy Nexus is finally available on the US largest carrier, Verizon. The Android top dog can now be purchased with next day shipping from both the Verizon on Amazon websites in the US.

The asking price for the LTE-pakcing Samsung Galaxy Nexus is $299.99 and that's only if you sign a 2-year contract. It certainly is expensive, but we can't say we are surprised, really . Verizon is trying to push all their top-shelf smartphones to the $300 price point for some time now and we couldn't imagine the Galaxy Nexus would go much cheaper. 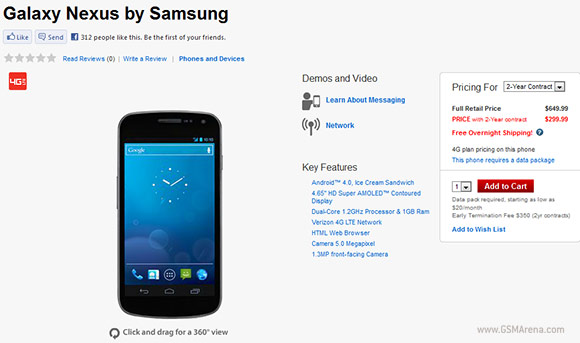 The good news is that there's already a nice deal to be had with the Samsung Galaxy Nexus. The online retailer LetsTalk is willing to sell you the smartphone for $154.99 if you sign a new contract, which is nearly half the regular asking price of the smartphone. If you are a Verizon subscriber, looking to upgrade, you'd have to pay an extra $20, but the price still remains unbeatable.

All you need to do to get the discounted rate from LetsTalk is insert the code $75VZN at checkout.

I would take that price if my contract was finished already :/