We've gathered three of the best Android phablets with a 5.7" screen. All three hail from the East but instead of Zen calmness they epitomize the latest and greatest in mobile technology.

We will focus on several key areas, starting with the screen quality and battery life. Those are the best things about large phones - large screens and large batteries. We'll also look at how their chipsets perform, how they do sound-wise (both with and without headphones) and we'll finish off with a deep dive in camera quality. 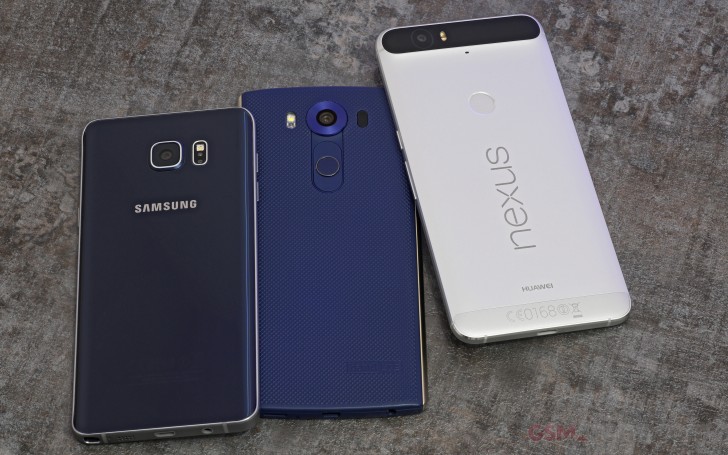 If we have to summarize the differences between these phones our keyboards will run out of ink ribbon, so here is a more concise comparison.

This is the first Nexus to have an aluminum unibody (previous models used metal more sparingly) and it's the first one from Huawei. It features mostly the same specs as the LG-made Nexus 5X, except for the better screen (a larger, sharper AMOLED) and the faster chipset (Snapdragon 810 vs. 808).

The LG V10 is an improved version of the G4, the first of a new flagship line. LG made it more rugged and added a unique secondary display which can stay on 24/7. The company also improved the software for the impressive camera (same as the G4) and added a second selfie camera so you get a choice of solo shots (80° field of view) and group shots (120° FoV).

The Samsung Galaxy Note5 is like a grown up S6 in terms of design and specs, but it brings the signatory S Pen stylus. The Super AMOLED screen has been polished to perfection and you get the latest fast charging tech - the one that doesn't need cables.

I don't think it's tremendously fair to knock the V10's battery performance so much when you can actually get a full charge in under a minute... by swapping in another battery, something you absolutely can't do with the other two. That deserves point...

Absolutely awesome review, appreciate the time spent here. Two things I'm bothered by, one even in final conclusion when speaking of battery you forget to point out the LG V10 will allow you to insert another battery with very little trouble. Th...