The upcoming Samsung Galaxy Note8 leaked in a press render showing its Deep Sea Blue color version less than a day ago, and now we're back with more on the highly anticipated device.

First off, a Note8 dummy has been caught in the wild somewhere in China, and an impromptu photo shoot resulted. Here are the most relevant images: 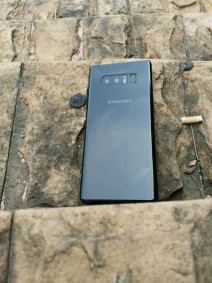 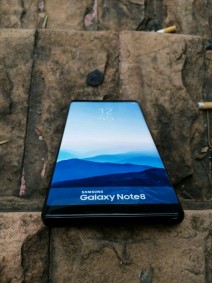 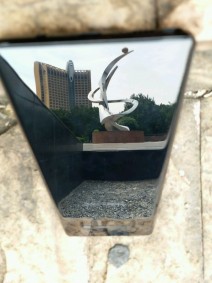 The dummy is basically a very accurate representation of all the leaked press renders we've seen of the Note8 so far, no surprises there. The less rounded, slightly more blocky design compared to the S8 and S8+ is included, along with the dual rear cameras, awkward fingerprint sensor position, glass back, and near-bezelless Infinity Display.

Here to confirm some of the phone's most important specs for the umpteenth time are the leaked promotional materials you can see below. The leaflets specifically reveal that the screen will be a 6.3" QHD+ Super AMOLED panel with minimal top and bottom bezels. 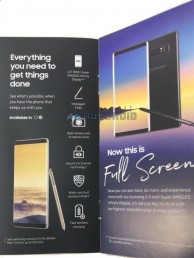 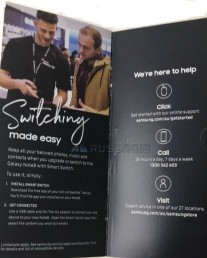 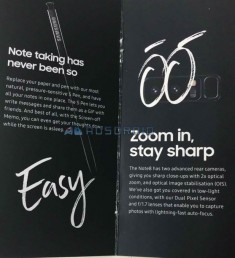 There's also confirmation of IP68 water and dust resistance, the S Pen being in there, and the iris scanner making another appearance in Samsung's high-end smartphone portfolio. Wireless charging is a go too, unsurprisingly.

The telephoto camera on the back will be capable of 2x fixed optical zooming (as revealed by a report earlier this week), and there's also mention of f/1.7 aperture and optical image stabilization, though it's unclear from these materials if one or both sensors have those features.

The S Pen will enable quick note taking even while the screen is off, and will let you write messages and share them with your friends as GIFs. Smart Switch will get your photos, contacts, and music from your old phone onto your brand new Note8.

Finally, note that only black and gold color options will be available in Australia (where this leak originated), at least at launch. Other hues may be released at any point after that, of course. The Galaxy Note8 will become official at a special event on August 23.

Wanna know a secret? I hope the new Note has a massive defect and is forced to be recalled again. Just to watch the drama and chaos unfold again. Does that make me like digital sociopath or something? I'm okay with that.

Nope only haters like you didn't forget most sensible people already have after the massive success of the S8 and S8+.

Are you waiting the back fingerprints change to a nice place on Note 9? Samsung fans.