Samsung Galaxy Note8 will be unveiled next week but a lot of specs are already known, like the dual camera or the Infinity Display. Now the phone leaked on GFXBench and AnTuTu, giving us a glimpse of its specs. This device will be the first Galaxy Note with 6 GB RAM. 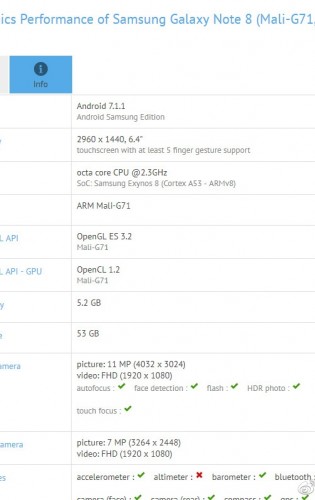 Looking at the AnTuTu listing, we see the model number SM-N9500, hinting that this might be the Chinese version of the Galaxy Note8. The chipset is Snapdragon 835 with the Adreno 540 GPU. The dual camera setup will be 12 MP + 8 MP, and the Android will be the latest Nougat 7.1.1.

The SM-N9500 will come with 64 GB internal storage. One interesting thing is the 1080 x 2220 resolution, which is the default option on Samsung flagships this year that feature adjustable UI resolution.

Looking at the GFXBench listing, several differences can be spotted. The OS and memory combo are the same, but the SoC is the Exynos 8895 with Mali-G71 GPU. The display diagonal is confirmed at 6.4 inches. The resolution is higher than the one on AnTuTu’s listing - this phone was set to its maximum 1440 x 2960 pixels.

One thing that is yet unknown is the battery capacity, but previous rumors hinted at 3,300 mAh.

Is note 8 sure come with 2X zoom?,does note 8 record vedio in 4k

So, there are orthodox resolutions now... Thou shalt not deviate from the one true ratio... This is an OLED screen. It's not like the black pixels around a 16:9 video will look different than the sliver of black bezel they replace, except they can ...