Galaxy Note8 to land in Australia on August 25, a Samsung document suggests

The Samsung Galaxy Note8 is set to be unveiled on August 23 and will likely go on pre-order immediately (though sales will likely start in September). According to a Samsung document, the flagship will reach Australia soon after the US/EU reveal – August 25.

The document details the “Screen Assure Offer”, TL;DR: you get one free screen replacement in the first 12 months after buying the phone. This deal kicks off on Friday, August 25, making it the likley start of the pre-order campaign. 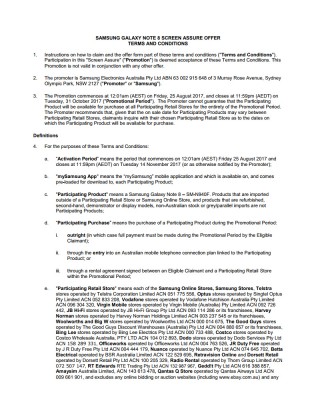 The salient details of the document

The document also helpfully lists the participating stores and all the major players are covered: Samsung stores (off and on-line), carriers Telstra, Optus, Vodafone, Virgin Mobile, then retailers JB Hi-Fi, Harvey Norman, Woolworths, The Good Guys, Bing Lee, Costco and quite a few others.

You will not like it because is won't have a removable battery. Stay stuck to your pre historic Note 3. LOL!

Ya my Note5 is still running great!

I'd rather go for premium Note 5.