Galaxy Note8 with Exynos chipset pops up on AnTuTu

There might be a week until the official unveiling of the Samsung Galaxy Note8, but the phone is already a frequent visitor at benchmark listings. The device with Exynos 8895 appeared on Geekbench and GFXBench while the Snapdragon 835 version popped on AnTuTu yesterday. And today was the day for the Exynos-powered Galaxy Note8 to show up on the Chinese benchmark leaderboards. 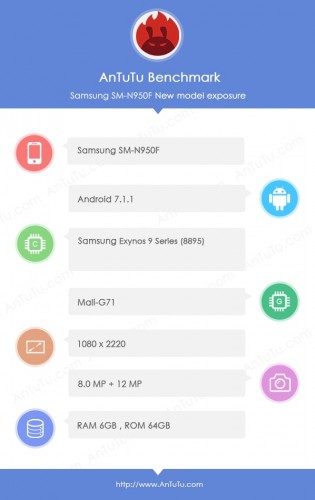 Most specs were already leaked, but let's have a quick recap of what's expected. The Exynos 8895 chipset will be paired with 6 GB RAM and 64 GB storage, although other versions with different internal storage are still a probability for some markets. The OS of the phone with model number SM-N950F is Android 7.1.1 Nougat.

The resolution has the Infinity Display ratio of 2220 x 1080 pixels which is the default setting. You can tweak it up a bit in order to reach the maximum 1440 x 2960 pixels from the Samsung menu.

AnTuTu does not provide information about the battery capacity, but leaks already suggested it will use a 3,300 mAh battery.

More than the 64 GB ROM offered will be needed for high storage applications, as well as security and software updates that will eventually arrive in the future. Offering supposedly future proof 18.5 : 9 aspect ratio with not so future proof 64 ...

no no u get it wrong new tactic.... mark up high2 first then offer discount after discount.... so that some customer like u who buy discount think vowwww.... i am lucky i get very good offer.... lolllll

As a Note 5 owner and a Note fan!!!!!, Samsung, we see through your plan, it's pricy because you have to make up for the colossal loss of the Note7. That's...unfair...stupid...greedy...counterintui­tive. There is no reason why this phone should...