The Samsung Galaxy Note9 will debut a new color option - brown – but there are more changes compared to the Galaxy Note8 palette. The color options can be gleaned from a list of S Pen versions (their colors will, of course, match the main body of the phone).

So here are the colors:

If you remember, the Galaxy Note8’s Orchid Gray color option was more of a violet hue, despite its name. But with the Galaxy Note9 there is explicit separation between Gray and Violet.

Compared to the Galaxy S9 (which has a proper gray color paintjob), we’re missing Red and Gold. Samsung likes to save up a few hues to launch a few months into a phone’s life, so we’re sure one or both of these will be added. We can’t have a phone with no Gold color, can we? Or a Valentine’s Day without Red/Pink.

Note that according to some rumors, the Blue version will actually have gold highlights, so it may stand out from the rest of the pack.

Meanwhile, the Exynos 9810 version of the upcoming flagship went through Geekbench again. This time both 6 GB and 8 GB versions were tested. And we’ve already seen the Snapdragon 845 version. 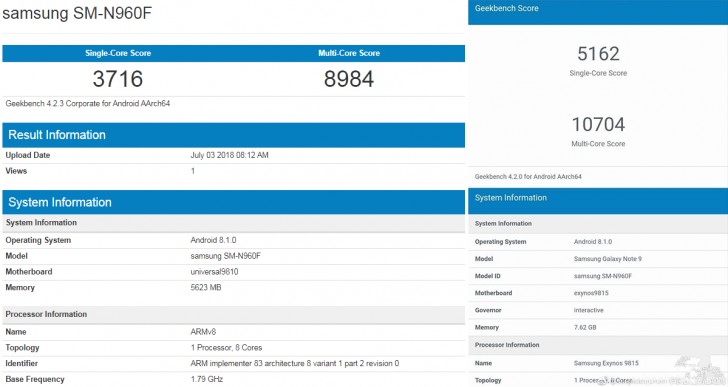 Bring back the White color !

Well it doesn't lag, Ive used it for 7 months now and not once has it lagged.