Not content with just two versions of its Galaxy S4 flagship (Active, mini, zoom aside), Samsung created a third version - a South Korea-exclusive S4 with Snapdragon 800. We’re getting more and more indications that there will be an international version of that phone.

First there were some pretty impressive AnTuTu benchmark scores, now there are screenshots from another AnTuTu run. The total score is lower than the previous leak, lower than even the Korean Galaxy S4 LTE-A benchmarks. 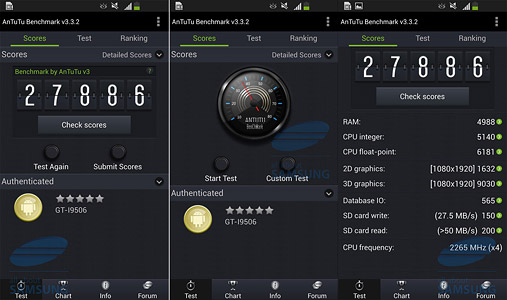 Anyway, the screenshots confirm the I9506 model number, 2.3GHz Krait 400 CPU and Adreno 330 GPU. Those are all the ingredients of a Snapdragon 800 chipset, which has LTE-Advanced (Cat. 4) connectivity or 150Mbps downlink speed. 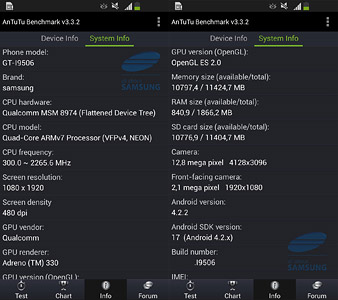 The phone was running Android 4.2.2, same as the current Galaxy S4. The software is most likely unfinished, which explains the inconsistent scores.

Unfortunately, all the rumors so far have failed to deliver a believable announcement date - the upcoming IFA event is a possible target, but historically it’s when Samsung announces the Galaxy Note.