With the major press events behind us, we were able to spend some quality time with the Galaxy S6 and Galaxy S6 edge, and appreciate their design. Conceived as Project Zero, the devices carried the massive responsibility of bringing something entirely new to the table in light of constant criticism for Samsung over their unimaginative designs.

The Galaxy S6 and Galaxy S6 edge offer a smooth blend of novel design concepts with the familiar Samsung of old. The shape and proportions are unmistakably Samsung all over. The ever-present home button remains a key point in the interaction with the smartphone. The earpiece might as well be the same as in the original Galaxy S. The central camera is dramatically sticking out the back.

And then comes the new. To begin with, there's all that glass. It's obviously not the first time we've witnessed a phone with a glass back panel, but it's the first Samsung one in the top-tier. Arguably it's the easiest way to achieve the upmarket feel while keeping weight down. Adding to the high-quality appeal, the body has been kept reasonably thin at 6.8mm for a proper balance between handling, appearance and battery capacity.

However, this new design has meant a few compromises had to be made, and with core Samsung features at that. A long-time selling point of the Galaxy lineup has been the user-replaceable battery, allowing instantaneous 0 to 100% charge. Not any more though, as the new body is sealed. A quick charge capability will attempt to offset that, but it still requires a power source. MicroSD expansion has been sacrificed as well. Perplexingly, the all-glass design carries no IP certification for protection against the elements, a feature that glass Xperias had from the get-go.

Moving on to the frame, it's a subtle throwback at the Galaxy Alpha with its bulging corners, only here the look is a lot more refined. It's a four piece affair with the sides curving towards the top and bottom, where separate strips house various connectivity interfaces.

The bottom on the Galaxy S6 is pretty crowded and is home to the USB port, standard 3.5mm headphone jack, microphone and speaker. The top is simpler, with only an IR blaster and a pinhole for a secondary microphone. In typical Samsung fashion, the left side houses the volume rocker, while the power button is on the right. Just under it is the pop-out SIM card tray.

The Galaxy S6 edge is largely the same in terms of controls distribution, with the only difference being the SIM card tray. The thin frame on the sides brought about by the dual edge display leaves no room for such bulky components and the tray has found its home on the top, next to the IR blaster.

Speaking of the dual edge, the Galaxy S6 edge is a joy to handle. Swipe-in gestures from the sides meet the gentle curves for a pleasant tactile experience. The display takes up just enough of the sides to provide a novel feel, without resulting in unintentional activation of the edge features. 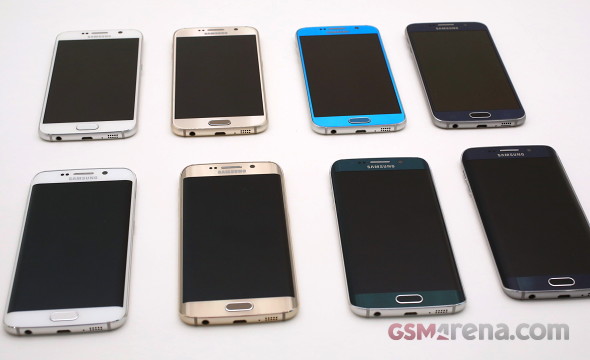 The Gorilla Glass 4 panels cover a color layer, which plays with incident light and produces a glittery effect. Both phones will come in a choice of four colors with White Pearl, Black Sapphire, and Gold Platinum shared between the two.

The conventional Galaxy S6 will offer a Blue Topaz option while the Galaxy S6 will sport a more restrained Green Emerald. We heard a few cries of disappointment that one will need to make a choice between the edge and the Blue Topaz color, and hope Samsung releases such a combination.

A range of accessories will naturally accompany the Galaxy S6, among them a semi-transparent flip cover case that will wrap around the back and double as a mirror. It's recognized by the phone and flipping the case unlocks the phone an takes you straight to the homescreen. When closed, the phone displays just a clock underneath the cover, producing a neat floating effect.

In the end, there will be those that say that Samsung copied Apple. While the similarities are uncanny, there are only so many ways you can make a smartphone, and if lawsuits aren't being filed and patent authorities are silent, so should we. What we held in our hands were two beautifully crafted devices, possessing their own personality, and that's good enough in our book.

Another area where Samsung took plenty of hits, was the fingerprint reader implementation on the previous generation flagship. The swipe motion was a hit-or-miss affair and it hindered universal use of the feature.

The company certainly took its time addressing it but it finally came with a genuinely better solution after using the same sensor not only in the Galaxy S5, but also in the Galaxy Alpha and the Galaxy Note 4.

The speed and ease of use is now on par with the iPhone 6, as you can see in the quick comparison video below.

Follow us on the next page, where we'll share our experience with the new Galaxy S6 camera.