The Russian phone customization experts at Caviar are at it again, revealing the newest Putinphone. This one's based on Samsung's Galaxy S7, and like all other Putinphones before it comes with President Putin's face engraved on the back. And, to give your handset that extra shot of bling it so desperately needed, one version of the S7-based Putinphone features 190 actual rubies around Putin's face (as seen in the image below).

Everything else on the back is gold, and only three of these "Caviar Samsung Supremo Putin Rubino" models will be made. You can be the lucky owner of one for the measly sum of RUB 1,790,000, or $27,213.

If you want Putin's face on your phone but simply can't afford the Rubino Galaxy S7 described above, perhaps you do have enough dough to buy the Mixed Metals iteration, which is only RUB 169,000 ($2,570). This one has yellow and white gold on it, no rubies though. 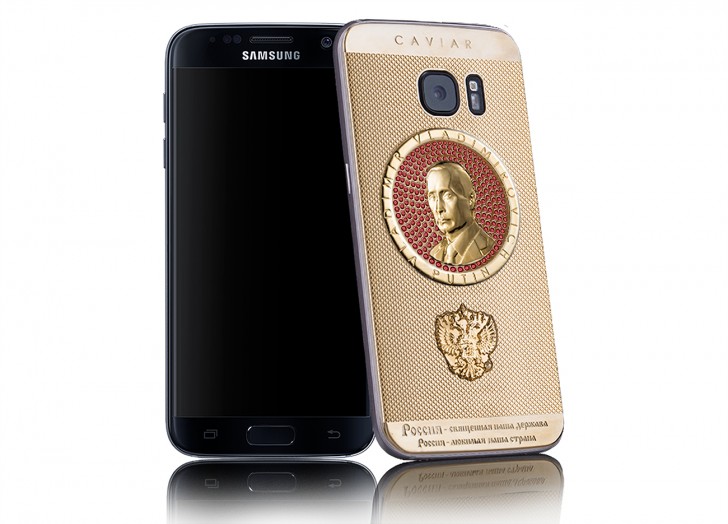 Finally, the peasant's Galaxy S7 Putinphone is the RUB 159,000 ($2,418) "Caviar Samsung Supremo Putin", which boasts a titanium plate on the back that's gold-colored.

All of these are up for pre-order now from Caviar's official website. All have the Russian coat of arms engraved on the back underneath Putin's head, and in the lower part two lines from the country's national anthem.

If you love Russia, but don't want Putin's head on your phone, the "Caviar Atlante Russia Ornamento" is for you. For just RUB 149,000 ($2,266), you get a colored version of the Russian coat of arms and the traditional Russian painting technique called Khokhloma showing you some very colorful berries and flowers.

im not a samsung fan,but if they do this MR.MAHINDA RAJAPAKSHA PRESIDET OF SRI LANKA i will buy it,. i wont use it though. i will keep it as a colector item.he is the only one who gave us the freedom

Note i said: Putin and the "oligarchs around him" I used the "". No one knows if he removed the oligarchs or not.