While none have exploded yet, Samsung's Galaxy S8 and S8+ haven't been 100% issue-free since they were released last week. Many people have reported a "red tint" being present on their handsets' screens, and the Korean company has already promised to put out a software update fixing that. The self-imposed time frame was "before the end of this month", and it looks like Samsung kept its word.

The much anticipated update is now in the process of rolling out to Galaxy S8 and S8+ units sold in the company's home market of South Korea. For the S8, the new firmware version is G950NKSU1AQDG, while the S8+ gets G955NKSU1AQDG. 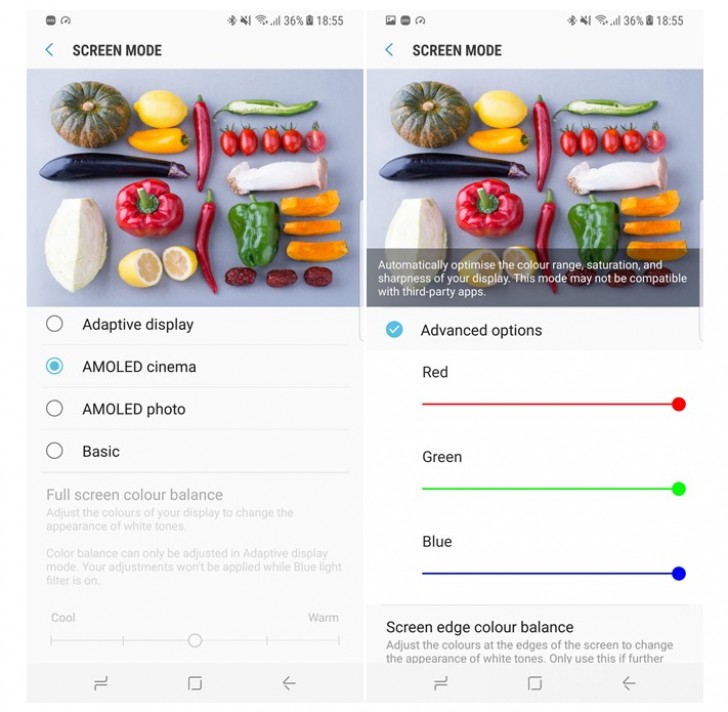 For now the update hasn't been spotted in other markets, but we assume it's going to spread across the world in the following days. It brings an additional setting in Adaptive Display screen mode, letting you adjust the full screen color balance as you see fit.

In the Screen mode menu a new Screen edge color balance option can now be found, and you can use this to adjust the colors at the edges in order to change the appearance of white tones.

Samsung has apparently promised to replace affected devices if their owners aren't satisfied with their colors after applying this update. Unfortunately the full screen color balance adjustment only works in Adaptive Display mode, so if you want a calibrated setting and the red tint gone, it looks like you're out of luck - so you may want to take advantage of that 'free replacement' promise from Samsung.

The ones from Samsung, from smartphone production department (only amateurs left there) are some ... amateurs. Any specialist in electronics, computer science, etc. laughing with tears of their way of solving the tint red. That's how it happens when...

Where do you live man..? I get my things delivered next day from Amazon all the time. it's not that hard. Anyway no use in calling him a liar, I'm on my second S8+, the first had a stain on the screen. It happens all the time.

What kind of mail is that fast? Fake as f***. Still impossible in that little time frame with multiple exchanges. You think re-mailing it back is fun and easy? Its time consuming. Takes days for it to be returned and takes even more days for the new ...