As it has done in the past, Samsung is dual sourcing the image sensors for the Galaxy S9 and S9+ – depending on where you buy yours, it may have a Sony-designed IMX345 or a Samsung-designed S5K2L3 ISOCELL Fast. TechInsights has examined both sensors at a microscopic level and found them to have a different design.

Both sensors have a 3-layer stacked design – a CMOS sensor with the image pixels, another for the image signal processor (ISP) and finally a DRAM chip for those coveted 960fps videos. But the organization is different.

Sony’s IMX345 is very similar to the IMX400 introduced with the Xperia XZs a year ago. It puts the DRAM in between the CMOS sensor and the ISP logic.

The Samsung S5K2L3 on the other hand looks like a traditional 2-layer sensor with a CMOS bonded to an ISP but it now as a DRAM chip connected to the bottom. Specifically, a LPDDR4 chip measuring 3.17 x 5.33 mm (16.9 mm²).

We even got an interesting timeline showing that Samsung has been catching up to Sony. Sony was the first to introduce a 2-layer design in 2014, followed by Samsung’s version in 2016. Then Sony made a 3-layer sensor last year and Samsung made one this year. 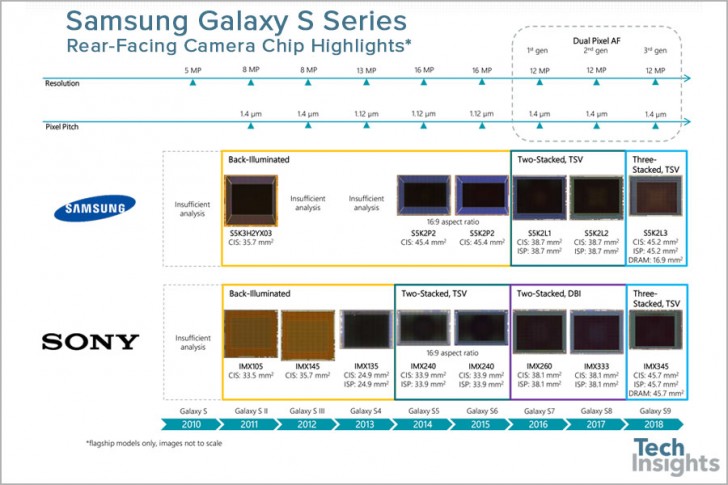 You can follow the source link for more intricate details on the image sensors. For example, Sony experimented with a copper direct bond interconnect between the CMOS and the ISP layers in the 2014-2016 period (this allows for higher density chips compared to the classic approach used in the 2017-2018 image sensors).

PS. You can use AIDA64 to check which sensor is in your Galaxy S9, just look at the Camera ID.

I had a S7 edge with Samsung sensor & my mom's S7 has the Sony sensor.Both runs on the Exynos 8890 chips.I compared both taking picture of a same scene.I found them to be very similar in quality,sharpness & low light performance.Where I did ...

Oh please jeep talking about S7, I am talking about S8. And it produces amazing quality pictures, one of the best 2017 cameras. Did you even read article??? It clearly says you download app AIDA64, and it tells you which sensors it uses. Mine are all...