The Samsung Galaxy S III continues the trend in the Galaxy S series to make the screen bigger and better. The S II has a 4.3" screen (though later incarnations grew to 4.5"-4.65"), while the S III jumps straight to the head of the pack of what still counts as a phone, with its 4.8" screen.

That extra half-an-inch (12.7mm) comes at a cost though - the Galaxy S III is 11.3mm taller and 4.5mm wider than its predecessor. What you get is nearly 11 square centimeters of extra screen real-estate. We'll get back to the screen itself later on.

The phone it technically thicker - 8.6mm vs. 8.5mm for the S II - but its thickness is a lot more evenly spread (the S II has a hump on the lower back and around the camera). The Galaxy S III has only a small bump around the lens and its tapered edges make it feel even thinner.

The outside of the Samsung Galaxy S III comes in Blue and White varieties, where the Blue has a sort of brushed metal look. Samsung calls the plastic used in the S III "hyperglazed", which means there's a transparent layer on top of the colored plastic.

We'll be honest - it doesn't look quite as inspiring as some of its competitors that pack fancy polycarbonate or aluminum unibodies. The Galaxy S II uses a regular, patterned plastic for the back and while it was nothing extraordinary, it looks a little better.

At least, the Galaxy S III stuck with the user-replaceable battery and the microSD card slot you can use to expand the memory, so it's not losing any points here. Samsung made the switch to microSIM (so if you're upgrading, you'll need to ask your carrier for a new SIM or cut the old one down to size), but at least they've moved the microSD slot away from the battery and it's now hot-swappable.

Speaking of batteries, the S III comes with an impressive battery - not Motorola RAZR MAXX big, but big nonetheless. The latest in the S series has a 2,100mAh Li-Ion power pack, which is 450mAh more than its predecessor.

Battery alone isn't the whole story though - there's a new chipset and a new screen in play.

3G talk time went up to 10 hours and 20 minutes (up from 8 hours and 35 minutes) for an S II running ICS. With two extra hours of video run time, it now lasts 10 hours. Web browsing meanwhile stayed pretty much the same - a little over 5 hours. That's not bad, considering the extra screen size.

Overall, our battery rating for the Samsung Galaxy S III is 43 hours - virtually the same as the 42 hour rating that an ICS-running S II got. Less efficient standby is what kept the S III from scoring higher.

Still, even though you'll need to charge the S III as often, at least you may get to squeeze in some extra talk time or watch another episode of that TV show. 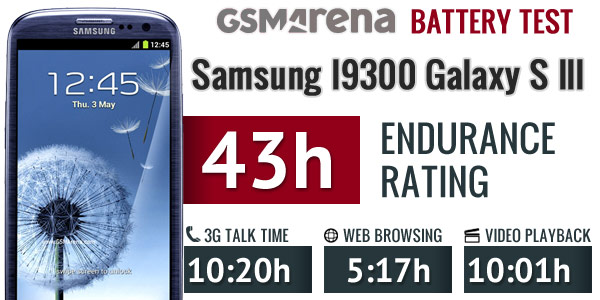 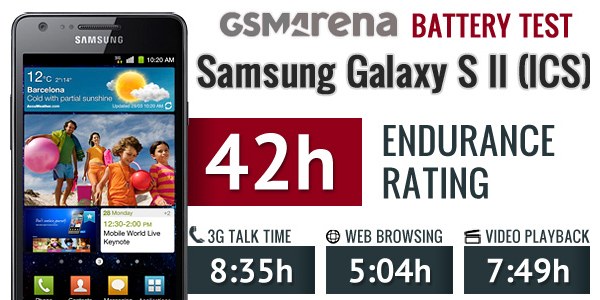