The Samsung Galaxy S II and S III both shoot 1080p videos at maximum, though as we saw with the still camera, that doesn't necessarily mean they have the same quality.

The interface is pretty similar on both phones, with the exception of the virtual shutter key available on the Galaxy S III. You know, it can snap full-resolution 16:9 stills while shooting video.

The video camera UIs are almost identical too (S III on top, S II on the bottom)

Both phones shoot 1080p videos at 17Mbps in MP4 containers and stereo sound with about 130Kbps bitrate and 48kHz sampling rate.

A welcome upgrade in the S III is that the field of view doesn't change when you switch from 1080p to 720p. On the S II, 1080p samples used to have a narrower field of view and you had to switch to 720p if you needed to fit more into the frame.

With the Galaxy S III, however, you get pretty much identical framing for both video resolutions - slightly more than you get from the S II in 720p mode.

This puts the S III at a bit of a disadvantage - because it fits more things in the frame, there are fewer pixels available to draw each object (as the resolution is equal). Still, the phone performs admirably - there's plenty of fine detail, no jaggies or compression artifacts, no noise either. The Galaxy S II is still a good 1080p shooter, but its videos are softer, with less detail.

Our toy Ferris wheel setup makes the difference clear. In the Galaxy S III videos, the grass looks much better, the banner text is sharper and more readable, the wooden planks are more clearly defined and the shadows are resolved much better.

The S III maintains the advantage under low light - the banner text is still legible and the grass is recognizable.

Our ISO chart shows noticeably improved resolution (both horizontally and vertically), the Galaxy S III is one of the best 1080p shooters in our database.

A 100% crop from our setup pinpoints the improvements in image quality. In some areas, the difference is quite stunning. 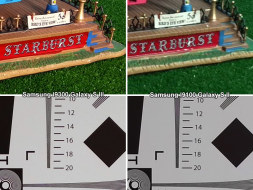 If it's just a matter of which of the two phones we'd like to have in our pocket, the answer is a straightforward "Galaxy S III, please". The S II was a trusted companion, but it no longer tickles our inner geek, while the S III feels like it comes from the future.

At the checkout, we started having second thoughts - the Galaxy S II will easily remain a great phone for another year, even if not quite as good as its successor. So, if you already have it and are not too keen to spend, it will easily last you till the Galaxy S IV, which is sure to come some time next year.

Things are murkier for those who don't already have a Galaxy S II though - sure, the phone is cheaper now, but is it worth spending money on a phone that already has a few gray hairs?

In the long run, a Galaxy S III (if you can afford it) is the better choice - it won't have aged that much by next year (when the S II will be old and creaky) and you would have gotten to use the better smartphone of the two during that time.

Also, its resale value will be higher after a year, so the cash you've spent for owning the phone might not be much more than getting an S II now only to sell it dirt cheap later on.

Okay, this conclusion will shock no one - the newer phone is better and that's hardly a surprise. But the thing is, if you had to choose which one to buy just now, the S III is better by just enough to make spending the extra cash worthwhile.