Recording FullHD (1080p) video requires a lot of processing power – and storage. The easiest way to improve the quality of the video (or make it worse) is to change the frame rate.

Now, MP4 is the better video container of the two and 18Mbps keeps more fine detail. Check out these crops from video frames taken from both phones. The Galaxy S II video frames are considerably sharper with much more resolved detail. 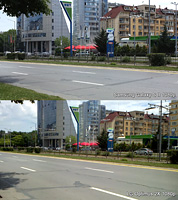 The Galaxy S II zooms in quite a lot when in 1080p mode (compared to the still camera or the video camera in 720p mode), so you might have to stand back. Also, both phones recorded mono audio at about 60Kbps and 44.1kHz sampling rate. Their audio is less than perfect.

Image quality is only one part of the equation – frame rate is the other. If a video is below the magical 24fps it appears unacceptably choppy, while anything above that framerate is perceived as smooth motion by our eyes.

We’re pleased to report that both phones produced videos with smooth, consistent frame rate and didn’t duplicate any frames. Not that they are completely without issues though.

The Galaxy S II would start recording and only then try to find focus. It even looked for focus during recording (despite being held absolutely stationary), which was kind of annoying.

The Optimus 2X on the other hand had trouble with the exposition during capture (triggered by the differently colored cars passing in front of it) – look at how the sky “pulses”.

Or you can check out these video samples we’ve uploaded to YouTube. Keep in mind that the extra bit of compression has taken its toll on the image quality. Don’t forget to choose the 1080p setting when you play the video.

Not everyone needs 1080p video, so we tested the Galaxy S II and the Optimus 2X in 720p mode. The S II drops the bitrate to around 12Mbps while the 2X goes under 5Mbps.

The advantage in image quality is still in favor of the S II though the difference is not nearly as dramatic as before if we’re to trust these video frame crops. 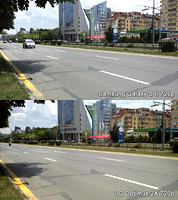 The Optimus 2X has zooming enabled in both 1080p and 720p mode, while the Galaxy S II activates zoom only when you switch to 720p. Both phones do regular upsample zoom, there’s no pixel binning going on.

Here are video samples from the Samsung Galaxy S II and the LG Optimus 2X uploaded to YouTube.

We’ve updated the Video quality comparison entries for the Galaxy S II and the Optimus 2X as well.

Individual frames from the Galaxy S II reveal that the video compression doesn’t result in many artifacts (compression-related or of any other origin). The actual resolution is notably higher than on the LG Optimus 2X.

However in low-light conditions the Galaxy S II resolution advantage quickly diminishes and its resolved detail is about the same as that on the Optimus 2X.