The Samsung Galaxy S IV specifications are now all but officially confirmed thanks to a leaked AnTuTu benchmark test that the phone has undergone. 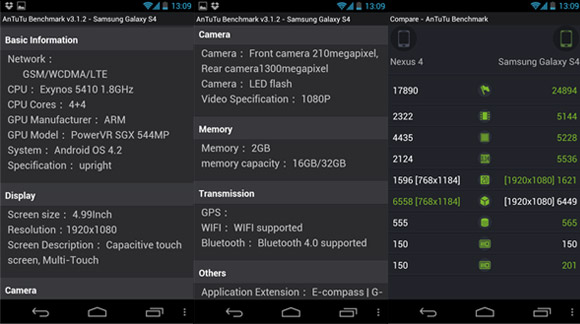 Samsung's upcoming flagship will sport an Exynos 5 Octa 5410 chipset with a CPU running at 1.8GHz, 2GB of RAM and a PowerVR SGX 544MP GPU. Previously the Galaxy S IV was rumored to sport the Exynos 5 Octa 5450 chipset rather than 5410. Still, the four Cortex-A15 cores combined with four Cortex-A7's are sure to be a pretty capable combo.

Additionally, the AnTuTu testing also confirms a 4.99" screen of Full HD resolution, providing a pixel density of 441 ppi. Android 4.2 is what the Galaxy S IV will run on out of box.

Interestingly, the scoresheet confirms that the Exynos Octa chip on the Galaxy S IV supports GSM, WCDMA as well as LTE networks. This refutes the rumor that Samsung will launch the phone in two versions with different chipsets.

Meanwhile another piece of Galaxy S IV gossip comes from Eldar Murtazin, who says that the device is going to be built from plastic. Mind you, he also claimed that the S III is going to sport a 12MP camera, and that he has personally played with it. We all know how facts turned out to be in the end.

Lastly, according to the benchmark's report, the camera of the Galaxy S IV is going to be 13MP, breaking Samsung's habit of using 8MP sensors in its high-end devices (Galaxy S II, Galaxy Note, Galaxy S III and Galaxy Note II).

The Samsung Unpacked event is going to take place in New York on March 14. We're sure it will be quite the show and naturally we'll be covering it live, so stay tuned.

In what fantasy universe? Nvidia not only invented the gpu but as far as processing capabilities power TITAN, the worlds fastest super computer. The tegra series has always outperformed its rivals, and so will the tegra4. Even breaking the mobile 2gh...