In a recent webcast, Garmin showed off their plans for expanding their fledgling product family with a new handset running on Android OS. This happens very soon after the Google Maps Navigation announcement.

Well, we are not really sure how successfl the nuvifone lineup is. As you may remember the GPS navigation oriented smartphones M20 and G60, running respectively Windows Mobile 6.1 and Linux based OS were launched this year by the duo Garmin-Asus. Both of them sport Garmin navigation software and present the two companies first step into the mobile division.

After the recent Google announcement for the free Google Maps Navigation for Android, Garmin announced in their latest webcast they will be joining the Android bandwagon in 2010. 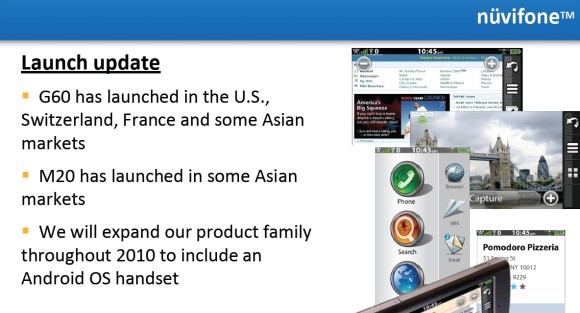 There is no additional information, but we expect some detailed announcement in the upcoming months (perhaps at the MWC in February 2010).

Good luck to Garmin..! Their biggest hurdle will be AT&T. I have been into 3 different stores and no one even has a clue about the phone, much less any interest. Secret shop it yourself and see..! So the solution is bring it to a service partner who ...

What's that? Providing targeted advertising specifically for you based on your browsing habits and where you go? Searches for businesses will bring up the highest bidders.

Google has been using the saved data for nobel reason. Reason- Providing traffic info to all users and not for selling.