Market research firm Gartner has released its smartphone market statistics for Q4 2016. The numbers reveal that Apple claimed the top position in the market with 17.9% share, up slightly from the 17.7% share it had in the same quarter the year prior. 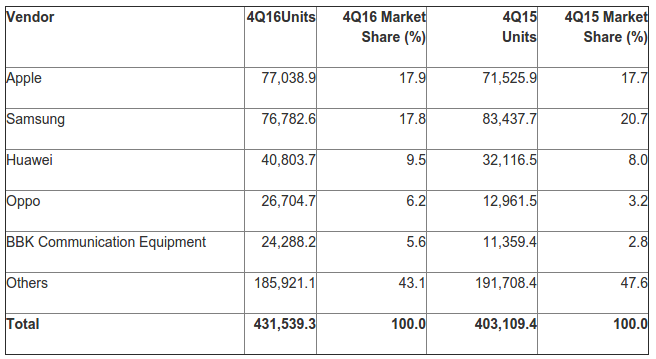 Samsung slipped to number two with 17.8% share of the market. That was down from the 20.7% market share figure the South Korean company managed in Q4 2015. Chinese manufacturers Huawei, Oppo, and BBK rounded up the top five with 9.5%, 6.2% and 5.6% share of the market, respectively.

Overall, for the complete year, Samsung claimed the top spot, while Apple came in at number two. 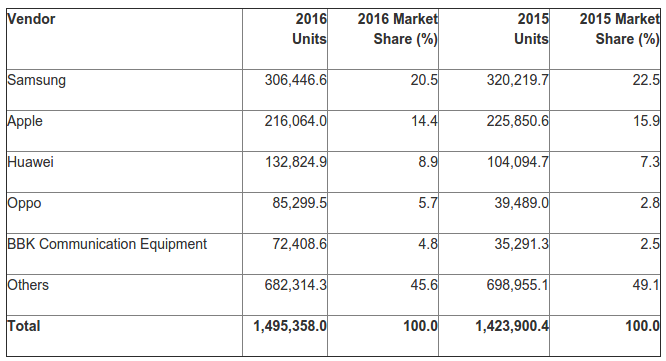 Talking about the OS market, Android consolidated its top position by claiming 81.7% share of the market. Share of Apple's iOS also increased a bit from 17.7% to 17.9%. While Windows Phone share reduced from 1.1% to 0.3%, that of BlackBerry OS now stands at 0.0%.

Ya, I don't understand why they even bothered to put a 3 year old OS in the list, OBVIOUSLY its going to be obsolete. Its like comparing windows 7 and windows 10... .

Why split OPPO and BBK since OPPO is owned since the beginning by BBK? Facts: BBK = OPPO + VIVO + Oneplus = #3 manufacturer WW