The analysts over at Gartner released its annual report on the mobile industry. To no one's surprise, 2011 has been the year of the smartphone, where almost every third mobile device sold is a smartphone. Gartner predicts this statistic should rise to 39% in 2012. 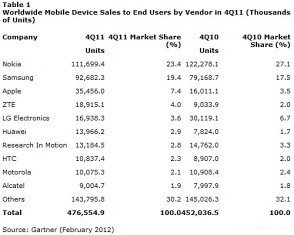 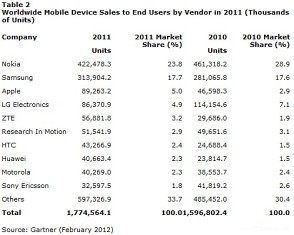 In terms of global market presence of all mobile devices (ie. not just smartphones), none of the statistics should come as much of a surprise. Apple has increased its market share to 5%, while Nokia has lost almost 5 points from the previous year. Samsung also had a solid year, and control virtually the same 17% market share as it did in 2010.

ZTE and Huawei were two of 2011's fastest growing manufacturers, where thanks to an emerging Chinese market, they now make up almost 7% of the global market. Taiwanese company HTC also had a good year, going from 1.5% market share to 2.3%.

The lion's share still belongs to Nokia, however, and 2012 will be a key year in determining whether the Finnish giant can turn a profit with its Windows Phone devices. The Lumia 710 and Lumia 800 debuts were not enough to stem the fall of WP market share, which saw a 65% decline compared to 2010.

RIM, LG and Sony Ericsson also posted some poor numbers, and RIM's struggles are expected to continue into 2012, due to the delay of BlackBerry 10 and a lack a of a developer database. Sony and LG will have to see how their new products will fare in 2012, although with the highly anticipated Xperia S and Optimus 3D 2 we suspect they might take back some of their lost ground. 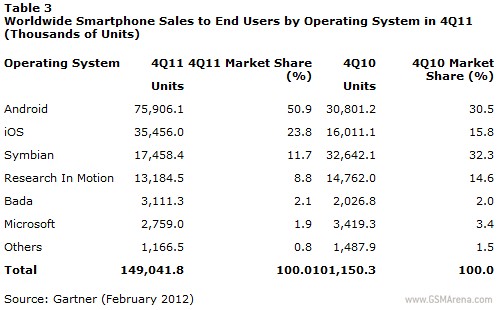 In terms of mobile operating systems, both Android and Apple saw huge gains—at the expense of Symbian. Android now has just over half of the smartphone market, at 50.9%, while Apple is up 8 points from 2010 to 23.8%. It's important to note that these figures do not take into account non-mobile devices running these OS's (such as tablets), and that while Apple rakes in all the profits from iOS, Android profits are instead split amongst its various manufacturers.

We are not talking about units sold but talking about over all market share. Lets say in 2010 worldwide total sales of smart phones were 100 units (just an example) and out of those 100, 20 were Samsung's, hence their market share was 20%. Now n...

open source o/s will be dere for ever but meego is a great o/s nokia should pull that back instead of windows & sym3& s60 devices. s60 devices are not bad but very bad compared to android & ios .....when it comes to ios it will down bcoz ...

Yes but one of the reasons I think that the iPhone so popular is because there's so much hype around it before it's released... that is only because Apple releases one a year but this does come with risk... people often over exaggerate a highly antic...