The upcoming iPhone 8 (or iPhone X, or iPhone Edition) that Apple might unveil at a rumored event on September 12 will completely kill one of the most iconic features of all its predecessors: the home button. This has been a staple ever since the first iPhone launched ten years ago, but according to a new report the iPhone 8 will not have any semblance of such a button - not even a software-rendered one.

Instead, you'll use gestures to control the device and replace the multiple functions of the physical home button found on the other iPhones. 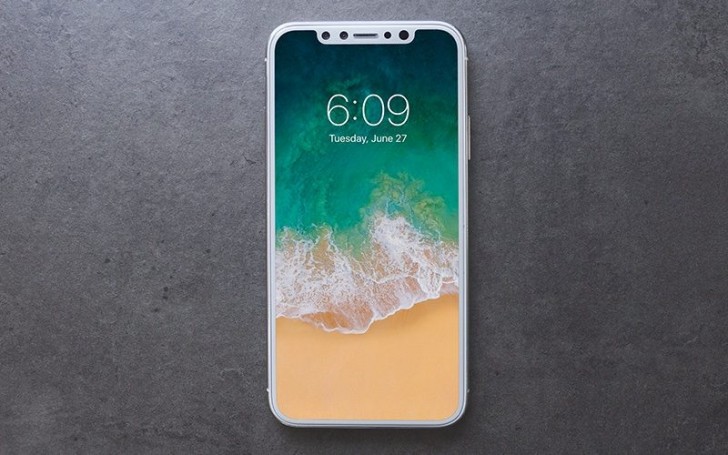 A thin software bar will be found at the bottom of the screen. Dragging this up to the middle will unlock the phone. Inside an app, the same move opens the multitasking view, which has been redesigned "to appear like a series of standalone cards that can be swiped through, versus the stack of cards on current iPhones". If you continue the upwards drag motion past the middle of the display, the app you're in will close and you'll be taken back to the home screen. The animation that accompanies this reportedly "sucks the app back into its icon".

The home screen will show six vertical rows of four apps, for a total of 24 icons on each page. Below these you'll have the dock, a grey bar at the bottom that shows commonly used apps. The interface of the dock is similar to what we've seen in iOS 11 on iPads.

The notch area at the top of the screen, which houses the earpiece, front-facing camera, and various sensors, will not be 'hidden' in software by making the adjacent areas of the screen on its left and right black. As this is an OLED panel, using black there would have essentially made the notch disappear. 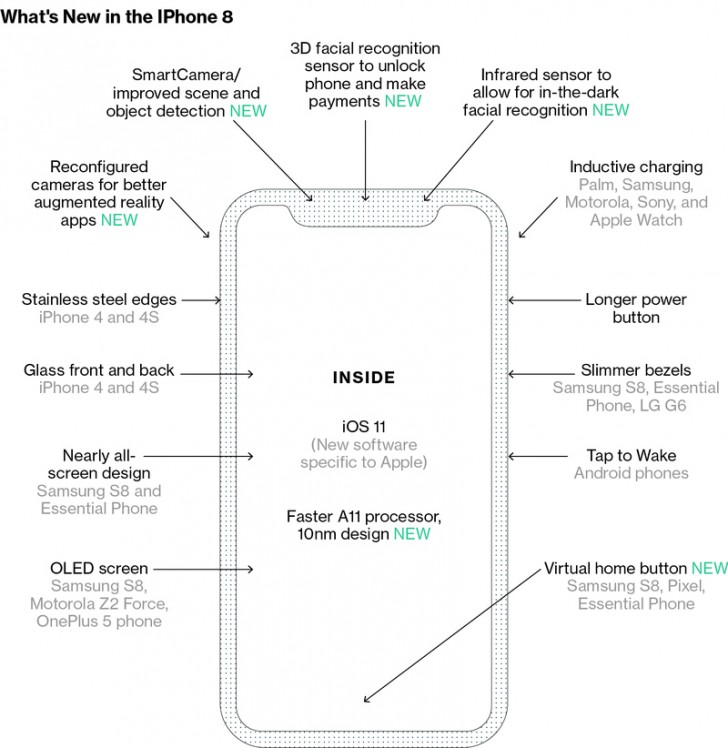 Instead, apps that have non-black backgrounds will use those 'ears', as some Apple employees reportedly call the left and right sides. The status bar will be split into left and right areas, with the former displaying the time while the latter houses the cellular and Wi-Fi connectivity indicators and remaining battery capacity. The status bar will change based on the task at hand.

This report confirms for the umpteenth time that the iPhone 8's display is flat and not curved like in Samsung's recent flagships. The handset's frame is said to be made from stainless steel, while the back will be glass just like the front. The steel frame has antenna bands on the corners for better wireless signal reception.

The iPhone 8's dimensions are allegedly very similar to those of the iPhone 7, but it sports a screen that's marginally bigger than the one in the iPhone 7 Plus thanks to the near-invisible bezels on three sides (left, right, and bottom). The power button living on the right side will be longer than in previous Apple phones, in order to make pressing it easier while holding the device in one hand.

reminds me of Blackberry 10 OS and Nokia meego.

We can because the Bezel looks terrible

android users can NOT make fun of the design because the new iphone looks like an android ( LG G6 and Essential phone) . I like that apple is doing this and finally having a full redesign to compete with the new androids. Since believe it or not, t...