Honor 5A Plus specs revealed by GFX benchmark

Honor is expected to release two new phones during an event to take place this Sunday June 12. The Huawei-owned company is going to announce the Honor 5A and Honor 5A Plus. 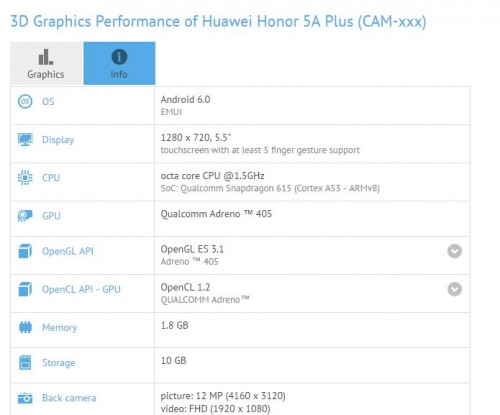 The same device was seen in a TENAA certification document just last month along with the standard Honor 5A model which features a smaller 5 inch screen, and a smaller 2,200mAh battery (the 5A Plus has a 3,000mAh battery). The CPUs are also slightly different as the 5A is powered by a quad-core 1.3GHz CPU while the 5A Plus has the Snapdragon 615 mentioned above.

The benchmarks conflict with the original TENAA documents though, as the benchmark mentions a 12MP sensor while the TENNA says it’s a 13MP sensor. All will be confirmed this Sunday at the Huawei Honor event.

Perfect phone for that special grandparent in your life.

oh huawei, why are u still doing honor 5 phones? we want to see honor 8 and honor 9 with much powerful specs. the competetion is very tight. kirin 960 or 980 will be wonderful think about it