Gigabyte GSmart S1205 offers two galleries. Both are available from the Multimedia folder in the Start menu.

The first one is the standard Windows Mobile 6.5 variety. It has no accelerometer support and you can't flick-scroll images.

The PhotoAlbum app is a new addition by Gigabyte and though not innovative or beautiful, is still better than the stock gallery. It's properly thumb optimized. Once an image is opened, you can zoom in or out or continue to the previous/next by finger sweeps.

With the PhotoAlbum app scrolling to the next image is smooth and instantaneous with a single move of the thumb.

Unfortunately, Gigabyte stopped right there and did not bother to include any custom music or video player to complement the standard Windows Media player. As usual, it's poor at managing playlists with your favorite songs, and generally has limited functionality. The interface is less than touch-friendly.

Watching varied video content is almost a no-go as there is a limited support for video formats (and codecs).

Windows Media Player is a letdown

Core player is the better option

If you’re not impressed with the Windows Player, you may want to install a third-party media app such as the Core player. It successfully played all DivX/Xvid movies, except those using the AC3 audio.

Keep in mind that only videos with maximum resolution of 1008 x 1008 are supported so if you can skip the HD playback (it doesn't really make sense on a mobile screen anyway), you will be happy to know that all other videos we tried played smoothly with no audio problems or dropped frames.

We ran some benchmarks with the Core Player against the Acer neoTouch and the HTC Touch Diamond and here are the results. 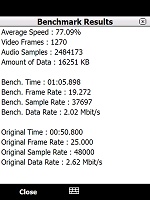 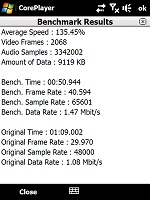 The audio output of the Gigabyte GSmart S1205 is downright impressive, the handset faring great in our traditional test.

In addition to being on the louder side of the handsets we have tested so far, the S1205 achieved great scores across the board, making it impossible to find a weak spot in its performance.

Check out how it does compared to some of the other devices we have tested below. 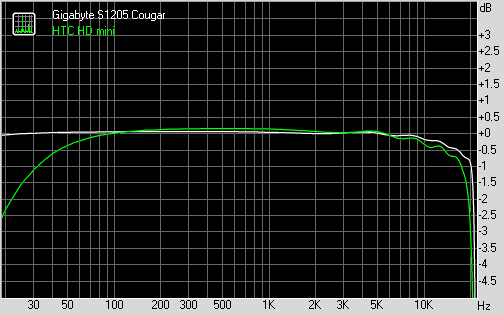 The FM radio has an excellent interface and offers memory for 20 radio stations.

The FM Radio on the Gigabyte GSmart S1205