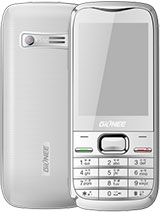 How can we increase the volume??

But of course, every thing is gud in this mobile. And its ui also designed like smartphone. Multitask capable for (MRE) mediatek apps. most of basic features are good.

Good phone but very slow chipset of 260mhz and low ram. Camera quality also low. But best in interface. It has JAVA 2.0 but cant run apps and games more because Java virtual memory is very less about 320kb memory (java VM RAM) no 3d rendering support for games. but another software MRE is best. the Nokia keypad phones are best running java apps.

Anonymous, 25 Feb 2017I downloaded java app in my gionee l700.when i go to launch it,it says"not enough memory" what... moreIf your gionee l 700 is showing not enough memory while launching apps, you should know that you have to insert a sd card firstly.. Then launch it. And you also ought to know that it cant launch apps which are more then 250 kB.

Bought this phone in New Delhi, India last December. Attractive phone, with decent build quality. Excellent keypad.
Glitches: The clock runs half an hour late. The battery goes on the blink without warning. Complicated inputs! Not easy to get started. Strange interface. Phonebook inputs. The looks and build are the saving grace for an otherwise mediocre phone. The Samsung Guru is a better phone though plasticky.

Which app and game install this mobile

I downloaded java app in my gionee l700.when i go to launch it,it says"not enough memory" what is the problem,please someone tell me

How can I install apps ??

I can't see any picture in my L700 gionee phone. Pls suggest me how to see PIC.

Will it support 4g sim & using 2g data in it

will it support 4G network

I am a low income buyer, and wish to economise. I am seeking a mobile which has a good phone as well as camera and hence I zeroed in on this one - I wish other basic models that come in the range of Rs 1000 to Rs 1200 would carry a good camera resolution of atleast 2 mp instead of just VHG ( which I understand is equivalent to 0.3 mP)

Total of 27 user reviews and opinions for Gionee L700.
ADVERTISEMENTS