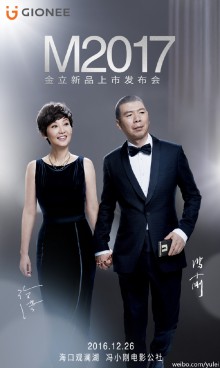 Last month the Gionee M2017 received its TENAA certification, a process which thankfully gave us a lot of information about this upcoming smartphone, including most of its specs. Then last week the Chinese company outed its first teaser image for the M2017, and today we get the second one.

While the image itself is almost identical to the earlier one, there is one all-important detail revealed this time around: the date of the official unveiling. The Gionee M2017 will be announced on December 26 at a special event.

So far nothing regarding its price or availability has been leaked or rumored, so those details are still a mystery.

right now top 10 brand are dominated by chinese brand.. and almost all electronic device were made in china or at least component used were made from china.. iphone, BB, hp, xbox, sony ps, laptops etc manufactured from china.. although samsung produc...