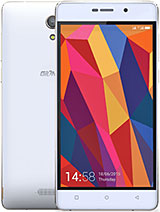 V. Sai Mahesh Babu, 17 Jan 2016i have been using M4 for 3 months. Superb... But ...recently i clicked update version in my ph... moreSir, I also had the same Gionee m4 handset . The device worked good until that update came out. I sold my handset and went for moto g3 which is awesome. I suggest if you are residing in Bangalore take it to Gionee service centre and change the mother board otherwise just exchange the phone for a different handset. The mobile outlets will offer you only 1,500 to 2000 rs for the handset they will tell u that it has no resale value. I got 7000 for my phone I bought it in August and sold it in Nov

Those who are using gionee m4 be careful'especially the display pattern bcoz of thin and crispy display what they provided 'internally even with a key can cause damage to the display its worth rs3200 'really the phone heat like a furnace 'hanging problem still arises !sensors are not good enogh -network pblm is serious threat -otherwise it's a good phone at this prize range

Those who are using gionee m4 be careful'especially the display pattern bcoz of thin and crispy display what they provided 'internally even with a key can cause damage to the display its worth rs3200 'really the phone heat like a furnace 'hanging problem still arises !sensors are not good enogh -network pblm is serious threat -otherwise it's a good phone at this prize range

Pls. Pls. Don't go with GIONEE M4. It is hopeless phone, I & My friend bought this hopeless phone on 04/9/15 and till 22/12/15 I have to go to service center twice first on 2/12/15 & second time on 22/12/15 for software problem. When I reached the service center second time the service people said Pls. Don't update the phone online because the update realised by the GIONEE company has BUGS in it. But even though I have not updated since 22/12/15 I am having problem of phone hangup & phone HEATING at times.

i have been using M4 for 3 months. Superb... But ...recently i clicked update version in my phone. Since then my phone is hanging for atleast one minute daily.... Plz inform how to get rectified

I am using this device last 2.5 months. And i am not facing any problem. M4 is the best smartphone ever. Super battery backup, and working very smoothly. I am just want to say hats off to gionee m4. THANK YOU.

gogo, 06 Jan 2016Hangs up every now and then....worst nightmare slipped and damaged touchscreen.. Gave to Local... moreAccedently my phone got sliped and damaged the display of phone badly of gionee m4 any please help me how much the cost comes for display

After 2 weeks of use, my Gionee M4 started hanging. On repeated tapping, it displays ` Carefree launcher isn`t responding`. Screen shows `Emergency calls only. Due to non displaying of apps, phone calls, sms etc are held up. Plz plz help me out

Best phone
i love it

Wrost phn I have ever bought. I bought this phone from Snapdeal last month and got it on 14 th December. Within few day its getting hanged every now and then specially during making a phone call. Dont go for this phone. Complete waste of your money.

I am using this Gionee M4 Marathon for 2 months. Previously I used a Gionee m2 for One Year.. I became a fan of Gionee brand... Thanks to the awesome power backup of both phones... M4 is the best phone for travelling executives or network related business people.. Last week an update came and updated...but the update is not good enough.. I got some software problem after that,, "care free launcher failed....".. Being an IT & Mobile Technician i am not able to rectify it and removed the update by doing Hard reset and now its working as good as my expectations..
Anyway It's a good phone... good camera, good battery, good style...
Thank u for Gionee people..

Hangs up every now and then....worst nightmare slipped and damaged touchscreen.. Gave to Local CC...more than a month gone...no news....Never even Think about buying...even if provided free don't take...its a headache

We have gotten android 6.0 the marshmellow update for the Marathon M3 and M4 Over the air here in China. It is absolutely awesome with improved battery life though it already has a superb battery and charges very fast very fast......

Hey I bought this phone in August 2015.
It is a highly disappointing piece as it neither provides longer battery as stated by the retailer nor it is reliable.
It gets hanged every 10 mins.
Really difficult to use this phone.

will there be android m update for gionee m4???

Atul Sohan , 07 Dec 2015Rooting is easy What u need is a PC and a custom recovery mode and the supersu update all of... moreI like to root my gionee M4. how to Install twrp, using sp flash tool. Please give me the instructions. will it wipe my phone data ? Or will it broke my phone? ? Please help. I have downloaded, Twrp recovery and flash tool, also supersu zip. So how to flash and install Twrp?