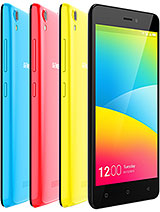 riya, 19 Jul 2017Should I update my phone to convert it into marshmallow.. Is there is any issue???If you are happy with your phone then I suggest you not to update your phone

riya, 19 Jul 2017Should I update my phone to convert it into marshmallow.. Is there is any issue???You will face wrong battery percentage show from phone apart from battery drain. However after marshmallow you might get a 32MB update which will fix all problems. I got this 32MB update after 1 month of Marshmallow update

Should I update my phone to convert it into marshmallow..
Is there is any issue???

HI GIONEE TEAM P5W IS NOT SUCCESSFULL model of gionee . To many issue to almost my friend or with every person using p5w. ......... MAJOR PROBLEM WHICH MUST BE SOLVED......... ..
1. Hang too much
2.slow processing
3.screen goes off when there is any incoming call (customer caution and know about call sensor)
4. While receiving incoming calls first only number display it take 10 sec.. to display name or dometime rhe name will not display
Minor problem
1. Battery draining fast
2. No video call features and phone is running in os 6.0

Major problem should be solved..

During incoming and outgoing calls, the screen light will automatically goes off.

my front camera is no longer working don't know why

Am tired of the battery of this phone,changed twice but damaging quickly

Dere is a update of about 148 mb on mashmellow anytime i download n istall it says curupt file,wat could b d problem? Gionee plz fix diz error or we start bycoting ur product for sumoder once with gud quality n specifications

Don't go for this phone. I had bought it in Jan'17 and having continuous issues till now.

My apps are not working. Please help me.

Upgrade. Marshmallow. Through gionee customer care is better or not ??????? What was the marshmallow. Problems experienced after update guys please. Tell