Google recently started seeding the latest v3.8.15 update to the Play Store app to Android devices. While on the surface the app seems to bring just minor UI changes, the file size was too great for such a minor change.

The super sleuths at Android Police smelled something fishy, so they ripped open the APK file (which you can download here) to see what secrets it hid. And hide secrets, it did. 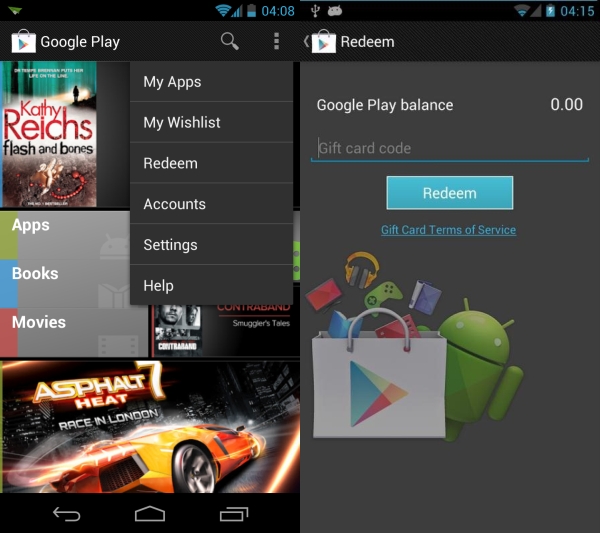 Turns out, Google is planning to release gift cards support for the Play Store. As you can see from the screenshot above, found inside the APK but currently inaccessible to the user, you will be able to enter a gift card code and redeem the amount. If you remember, Google added the ability to have a balance amount in your account when they started giving away $25 to every Nexus 7 buyer to spend on the Play Store.

There is also evidence that a wishlist feature would be added as well. This way you can add, say, an app that you intend to purchase in the future, perhaps when it gets a price drop.

Unfortunately, there is no indication of Google adding the option to gift apps directly, something that the App Store does. Also, the Play Store update still leaves a lot to be desired, with several annoyances, such as going to the top of the list when you go back after opening an app, still persist.

It is unknown at this point when Google will be releasing these features to the public but since they have been added in the latest Play Store APK, and considering how often it gets updated, it wouldn't be too long.

You can find more information with additional screenshots in the link below.

how to update this version ?

well i hope gift cards are available to philippines. i dont know why the itunes appstore dont have one.

You know gift cards were used in retail stores long before there was any appstores. Please explain why this is "copying"