Google leaks Huawei nova 5T, which will have a 5.5" screen

The Huawei nova 5T has appeared on Google’s Enterprise directory of phones. It’s not just a rebranded Honor 20 as rumored earlier, instead it’s a smaller phone with more memory.

The screen is listed as 5.5”, making it much more compact than the Honor, which has a 6.26” screen. The punch hole camera has been preserved, however and so has the side-mounted fingerprint reader, judging by the image (the recessed area under the volume rocker). 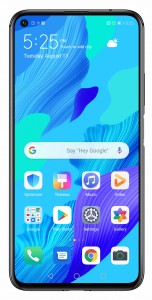 Unfortunately, that’s all the info Google supplies. There’s nothing on the rear camera, not even an image of the back. The date on the screen is “August 13”, but if that was the planned date for the unveiling, it didn’t come to pass.

This display size is compact, after all huawei make it ....

Phones screens are getting much bigger because of its weird aspect ratio. Anyone can make big screen phones, but to be honest the standard of video recording is still either at 4:3 or 16:9. So it's hard to see the significance of a larger screen.