Yet another Google Pixel 2 issue has come to light. It's related to random WiFi disconnects, with most reports mentioning the problem occurs while the device is on a mesh network setup.

The problem seems to be affecting both first and second gen Pixels running Oreo. On the network side, those with Netgear's Orbi routers seem to be affected the most. There's even a dedicated forum thread related to this on the official Netgear forum where users say Android 8.x crashes their router.

For its part, Google is asking for bug reports as well as some additional information. 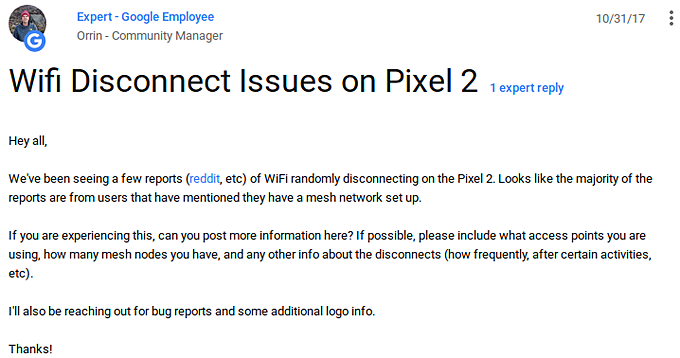 Got my pixel 2 yesterday. Rock solid wifi at work, does not work at home. It connects to my wifi, but claims there is no internet. The connection comes and goes, while the phone keeps reconnecting to my wifi continuously. Tried to do factory reset wi...

Hi, it looks like Moto X4 (I personally have Amazon edition of it but other people reporting have Android One version) having serious issues on google wifi mesh (and also on other mesh systems). My totally new phone was not able to connect to the mai...

This solution isn't feasible for all users! most users can't have fixed IP setup !