Google hasn’t had the best luck this year when it comes to software updates. Google’s updates have addressed things that needed to be fixed as well as broken things that were working just fine before an update. The Pixel XL received an unexpected OTA notification today. 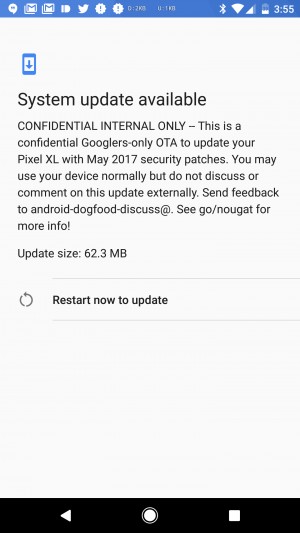 A number of readers have contacted Android Police as they received an OTA notification for a software update that reads: “CONFIDENTIAL INTERNAL ONLY – This is a confidential Googlers-only OTA to update your Pixel XL with May 2017 security patches…”

The update takes up about 62MB of storage. Given the small size of the security update, and the fact that there’s nothing significantly (visually) different in the new update, there can’t be much harm done.

One user reported that he got the new Play Store UI after installing the update, which could have set-off a server-side change in the Play Store.

Has anyone else received this update? Have you noticed anything else different? Let us know if your Play Store UI was updated as well.

I got the new Play Store UI, but I didn't get the OS update

Well, Google can say goodbye to secrecy part of the update...... They seem to have let the cat (or should I say, Dogfood) out of it's bag...