Gallery plus image and video editing

The Default view of the gallery is Albums, a list of all folders with photos in a rectangular grid. The other views are Locations (photos are grouped based on where they were taken), Times (grouped by when they were taken), People (photos with tagged faces in them) and Tags (these are general tags you can add manually).

A handy option is the Make Available Offline feature - it lets you easily select multiple online albums and download them for offline viewing. The Gallery app supports online albums like Picasa (but not Facebook) and you can set it to sync photos only over Wi-Fi.

Viewing single images has been tweaked somewhat. You still get the convenient share button along with a menu with several options - Crop and rotate tools, a more feature-rich Editor (we'll get back to it in a minute) and a slideshow.

You can swipe left and right to move between images in an album and you can also pinch to zoom out to display a strip of three images at a time. This is an easy way to quickly browse photos but also delete some - you just swipe them up or down. When you discard an image, an undo button appears allowing you to restore it.

A small icon at the bottom left launches the Editor (or you can do it from the menu). The editor offers filters, frames, crop/rotate/straighten tools along with color correction effects ranging from autocolor to manual curves control. Most of these options have a slider that lets you apply the effect with the desired intensity.

The Movie Studio app is back - it handles video editing and is quite feature rich. You can add multiple videos to the timeline and set their start and end points, you can add titles and effects (including transition effects between clips) add music and there are multiple options available when you decide to export the video (resolution up to 1080p and a setting for video quality).

Video player still not a priority

If you thought that having a microHDMI port on the Nexus 10 (or its excellent widescreen display for that matter) would make the video player a priority, you'd be wrong. There's still no dedicated videos app (you have to go through the Gallery) and the only supported format is MP4.

You have to consider that Google expects videos on the Nexus 10 to come from the Play Store, so they'll be appropriately encoded.

That's not a huge issue though, the Exynos 5250 chipset is quite powerful and you can always just grab a free third-party video player that supports the formats and other features you need (e.g. subtitles). After all, TV-out or not, that screen is just too good for video to go to waste.

Update: Using our usual test, we measured that the Nexus 10's battery lasts just over 8 hours when playing an SD video. We had to use MX Player to do it as our usual test video wouldn’t play on the stock video player due to the poor codec support on the Nexus 10. The big, high-res screen put more strain on the battery than the 7" screen on the Nexus 7.

Play Music for listening and shopping

The Nexus 10 comes with its own music player app and the interface is somewhat similar to the gallery - you get a grid of thumbnails, but instead of folders they represent albums here.

Most views use a grid with the album art (if any), though Recent uses a 3D view of the recent artists with a Shuffle all option included. You can tap on an item to open it or tap on the small arrow at the bottom right to open a menu with some options - queue the track/album/artist, add it to a playlist, look for more by that artist in your library or shop for more stuff by the artist, which of course takes you to the Google Play Store.

The Now playing interface features the album art with the track info and playback controls beside it. You can tap it to reveal more options - upvote/downvote the song, a scrubber and shuffle and repeat toggles. This interface makes sense on a phone, but on the Nexus 10 it seems like it doesn't make the best use of the 10.1" screen.

As most other tablets the Google Nexus 10 did very well in our audio output test. It's not quite as good as the iPad 4, but the differences are mostly in terms of volume levels

The Google Nexus 10 has nicely when connected to an active external amplifier, managed get excellent readings all over the field.

Most of the scores remain great even after you connect a pair of headphones, while the volume levels remain above average. Some intermodulation distortion creeps in, but it's almost perfectly undetectable to the naked year. 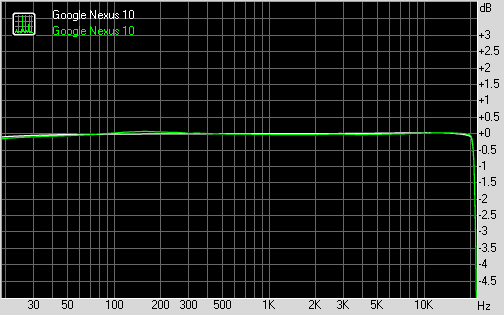