The Google Nexus S uses the traditional droid Gallery, which hasn’t really seen any change in Gingerbread. It has good functionality, cool 3D looks and nice transition effects, but unfortunately (and again) only shows a downsized version of your images.

The different albums and folders appear as piles of photos which fall in neat grids once selected. If you have online albums over at Picasa those show up as separate stacks as well.

Alternatively, you photos can be organized by date with the help of a button in the top right corner, which switches between grid and timeline view.

Thanks to the Nexus S multi-touch support pinch zooming is also available here but you can also double tap or use the +/- buttons. Unfortunately zooming in isn’t going to reveal much detail.

The Android gallery still shows only downsized version of you images, though if you send one from here the full-res shot is received on the other end. We were hoping that Google would have fixed that but it doesn’t seem like it’s on their list of priorities.

Images can be cropped or rotated directly in the gallery. Quick sharing via Picasa, Email apps, Bluetooth or MMS also comes in handy.

Google has something against playing local video files, we’re sure of it. Why else wouldn’t they preinstall a dedicated video player app is beyond us. To find your videos, you’ll need to visit the Gallery.

Okay, so maybe a fancy UI for picking a video is not that important, playing videos is what really counts. Well, that’s another disappointment – the video player supports only 3GP and MP4 videos.

To its credit, the Nexus S did play a 720p MP4 video though. And the 4” WVGA SuperAMOLED screen is a pure joy to watch. If you re-encode your videos before hand, the Google Nexus S can make a good video player.

Watching a video on the Nexus S

Music player has been neglected

Sadly, the music player saw no updates with Gingerbread on the Nexus S. It’s is not bad at managing your audio files but there’s definitely room for improvement.

There are four tabs, which offer the four main ways to search your music collection - by artist, album, song or the playlists you've created. Search by gradual typing is also available.

The functionality of the music player hasn't changed much. It has that great feature that allows you to quickly look up a song on YouTube, via Google search or in the local collection.

A nice feature is the automatic pause when you pull out the headphones. Also, you can adjust the volume even if the screen is locked (but the screen has to be on).

There are still some shortcomings of the music player that need addressing though. There are still no equalizer presets, nor any alternative skins. We won’t even mention goodies like flicking left or right to skip a song.

Having already tested quite a few members of the Galaxy S family, where the Nexus S has its roots, we expected the Google smartphone to do very well in our traditional audio quality test. Fortunately it managed to deliver and did as well as its siblings.

The more impressive part of the Google Nexus S performance is with headphones out of the equation. When connected to an active amplifier, the Nexus S audio output is simply flawless - all the readings are downright impressive. The loudness is good too, though we have seen better.

If you plug in a pair of headphones the Google Nexus S shows some extra stereo-crosstalk and intermodulation distortion. The frequency response suffers a bit too, but actually none of those gets too bad. Plus the volume levels don't suffer even one bit.

Overall the Nexus S does better than the I9000 Galaxy S, but loses a bit to the I9010 Giorgio Armani. That still gets it an excellent score though. 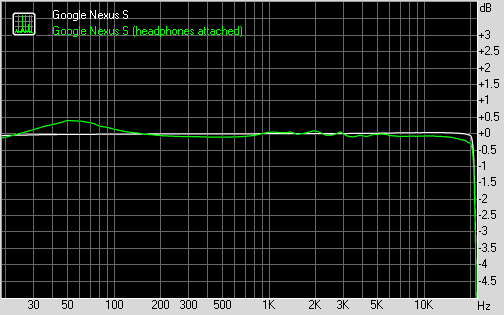