The Pixel gets you the purest of Android interfaces, the way Google meant it to be: free of any pre-installed third-party apps, carrier bloatware, or modified system menus. Given that it's the phone whose software Google has control over, the Pixel is appropriately dubbed the "G" Phone. 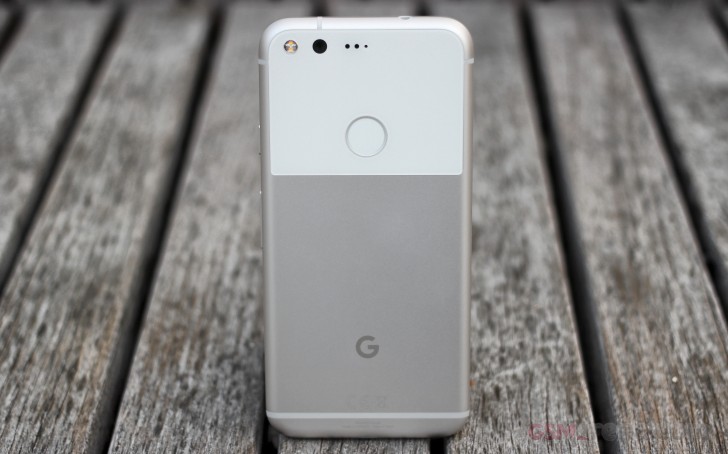 Starting with the launcher, Google did something similar with the Google Experience Launcher (eventually renamed "Google Now Launcher") when it was first released to the public, it was exclusive to the LG Nexus 5 until it eventually became available to all Android users.

Much like the Google Now Launcher, the Pixel Launcher is officially available for only the Google Pixel devices (though you can sideload it to any Android phone). The launcher has a few differences from other smartphone launchers. There is no app drawer button, rather, a swipe up from the bottom pulls up all your apps, like an actual drawer.

A 3D-Touch-like menu can be accessed for each app by simply holding the icon down for about a second. For example, if you press and hold the Camera icon, you'll get two bubbles that let you choose between "Take a photo" and "Take a selfie".

Launcher shortcuts let you interact with apps without opening them

A new feature baked into the Pixel launcher is the new Wallpaper chooser, which, as of recently, you can download to any Android phone from the Play Store and its Google's 'Wallpapers' app. You can choose between Live Earth backgrounds that are rendered upon unlocking the screen or swiping between pages on the launcher. You can also set some of the wallpapers from other categories like "Cityscapes" or "Landscapes" to change on a daily basis.

Unfortunately, there is no theme chooser. Even though Android once did support it back in Android 6.0 Marshmallow, the decision to remove it is somewhat strange. But perhaps Google had its reasons to get rid of it.

A fun tidbit: the new App drawer takes us back to the days of the T-Mobile G1 as the tab that you used to pull up from the bottom has been changed, morphed, and modified over the years. Yet, Google brought an original UI element back and refreshed it.

One more thing, there is a search bar in the app drawer which you can use to sift through your long list of apps while the top row of apps display recommended apps - recently used apps as well as recently installed ones.

There is no longer a permanent search bar. Instead, Google has given us a tab with a "G" which can be tapped for a Google search bar, or you can pull it to the left for Google Now. You can use the Google search bar to search for anything online or anything on the phone, such as contacts, Google Books, apps, etc.

Across the screen from the G-tab is a weather widget, which cannot be moved to another spot; It lives in the upper-right corner all the time, and doesn't even go away when disabling the Google tab.

Stock Android finally began supporting split-screen this year with Android Nougat 7.0. Yes, Samsung has been implementing it for years, but what we are referring to is vanilla-Android, which never supported it until Marshmallow, when the system could be tweaked to support it. But now with Nougat, it's supported out of the box. It only works with specific apps, but you can enable a setting in the Developer options to allow all apps.

Tap and hold the App switcher key on the navigation bar and the app in the foreground scoots to the top of the screen, then you'll be able to choose another recent app to fill the lower-half of the screen. So you can't launch a new instance of an app, it needs to already have been running. Google's official implementation is a bit simpler than other OEM's implementations of it.

Quick note: In portrait mode, you can adjust the amount of split between the apps, but in landscape, you're stuck with an even 50/50 ratio.

If you'd rather use full-screen apps and need to flip back and forth quickly, give the App switcher key two quick taps to perform the Android equivalent of Windows' Alt+Tab.

If you've enabled "screen pinning" you can access the feature by entering the App switcher, and tapping on a pin next to the app you'd like to pin. What it will do is "pin" an app to the foreground, and the only way to get back out is by tapping and holding the "Back" key, and entering a lockscreen pin, pattern, or password. Great if you've got a kid or two who love playing a game and would like them to stay within the app. Or if you find yourself constantly lending your phone to a nosy co-worker who needs to borrow your phone for some reason.

You can leave your screen unsecured, but you may be better off setting up a fingerprint, as it is the quickest way to get into your phone. While an unsecured phone requires a press of the power key, then a swipe up, with a fingerprint enrolled, pressing on the rear scanner briefly will bypass the lockscreen, skipping a whole step.

The fingerprint reader is very reliable, and registers our print well every single time, with the occasional "Finger moved too fast, try again."

If you'd like to check your notifications without using the power key, you can hold the sensor to unlock, then swipe down on the sensor to pull the notification shade down. This feature does need to be manually enabled, though. We aren't sure why Google hasn't enabled it by default, as it's quite useful.

Quick Toggles can now be quickly accessed at the top of the screen, bringing us back to the days of Jellybean 4.3 before KitKat moved all the toggles to their own, separate, area. This is also the first time AOSP-Android lets you rearrange them natively (without needing root or modded firmware). The first six tiles will be displayed in the top row of the notification shade.

There's also a brightness bar, but it's only accessible with the second pull of the shade, or a pull with two fingers will simulate a double-pull. There is no adaptive brightness toggle here, though, you'll have to dig through the settings for that.

On the Pixel, about 7GB are used by the system. Part of the large space required is due to the way the phone handles updates: the updates are installed into a second partition to a copy of the OS and once you restart the phone, the phone will boot from the newly updated side. No more waiting for Android to optimize apps!

Google's Pixel UI feels cleaner than what we had on the Nexus phones, and maybe a bit more simplified. But thanks to the flexibility of Android, you can change the launcher to one that supports themes. And if you're sick of the ho-hum stock Android build, you can go four steps ahead and unlock the bootloader and do something about it: install a new ROM with customized features. Unless you've got a Verizon unit, which doesn't allow for unlocking of the bootloader.

The Google Assistant makes its debut on the Google Pixel and Pixel XL. The Google assistant is the company's newest refresh of Google Now. While Google Now was more of a tool used for useful information. It offered basic voice commands, though they worked well. With the Google Assistant, Google took the excellent voice recognition and made it into an assistant that can respond with a friendly voice.

You can't ask the Google Assistant to track your packages like Google Now can, you need to say "track my package" into the Google search if you want to see your latest Amazon order. The Google Assistant will tell you "I can't do that yet". Even though the Assistant says "yet", and the intention to integrate the function is there, we just wish it was completely finished before launching it on Allo and the Pixel phones.

Still, the Google Assistant proved to be a better, more voice-accurate Siri competitor. A great touch is the extensive list of suggestions for search queries to help you find what you're looking for, while also learning the different things you can ask.

Google Assistant in action: asking about stadiums, the parking nearby, and what's to eat nearby

You can ask it what's around your area, how long it takes to get somewhere, quickly launch Google Maps navigation or transit directions. You can also use it to quickly translate phrases when traveling aborad provided that you have a data connection where you're headed. Then again, you could always use Google Translate and download a language for offline translations.

The Google Assistant was able to reliably tell what we were saying. Though there are always those few words that Google will hear the exact same way, no matter how many times you repeat it. You can always correct it, If it hears something wrong, you can say "No, I said _____" and Google will usually correct the search result.

As for what specific things you are able to do, Google Assistant is constantly being updated with new features and search combinations. You can ask it "show me cheap, top-rated restaurants" and it will display restaurants with more than 4-stars and rated with a single dollar-sign with "$" being the cheapest and "$$$$" meaning the restaurant has some really pricey items.

Last thing, when asked "turn on my Hue Lights", it responds "Sorry, I can't control lights from your phone yet. But I'm learning more every day." Which implies that the compatibility is coming soon. After all, if Google Home is able to control Hue lights, why shouldn't the Google Assistant?

Things Google Assistant can't do yet

It's also worth noting, Google Now on tap still lives on. Just like before, you hold the home button to activate it, the main difference is you have to swipe up on the Google Assistant to see what contextual results are found in the foreground.

The Google Assistant works when offline: And still retains much functionality (the same can't be said for Siri), though the smooth voice synthesis reverts to the old robotic sounding one. You can turn radios on or off (i.e. turn off Bluetooth), open apps and settings, send SMS and even emails via voice command, all while offline. You can't create calendar events or set reminders, but you still create alarms, and set timers.

Things Google Assistant can do when offline

If you want to get a taste of what Google Assistant can do for you, check out Allo on the Play Store. There's an in-app version of the Assistant that you can use on any Android phone.