A few quick words on software

Huawei's Master AI on the Mate 20 Pro will enable the Night mode processing when the light is below a certain threshold - if you like keeping things simple instead of having to think what's going to be best for the next shot, this could work for you.

Then again, it also means keeping your camera in AI mode, and that wouldn't be our general preference for everyday shooting. There's always the option for engaging the Night mode manually and it's super conveniently placed alongside the other modes. 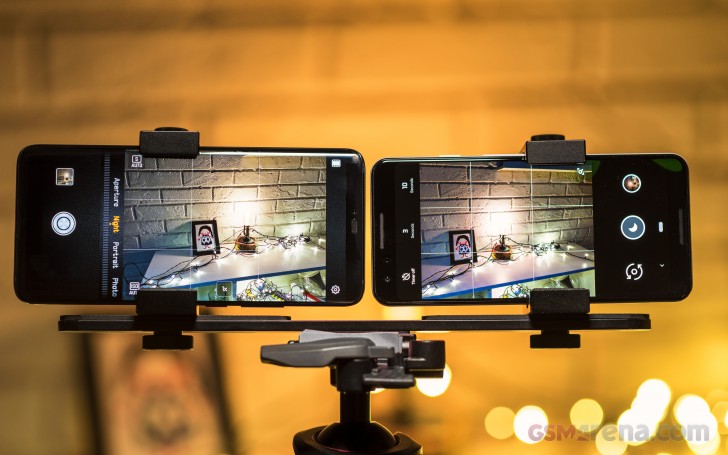 That's not quite the case on the Pixel 3, where Night Sight is buried in the More modes pane, and it could be a pain getting to it single handed - Google's camera app is full of idiosyncrasies. On a positive note, if you're in the Camera mode (a.k.a full auto) and the phone estimates that the scene is better suited to Night Sight, it'll pop up a reminder which also serves as a shortcut to the mode.

Both phones give you an opportunity to tell if a photo has been taken in their respective night modes. The Google way is by adding a crescent icon in the thumbnail in the gallery, while on the Huawei you can tell by the shutter speed - it'll write the entire pseudo long exposure's length in the EXIF, so you'll be seeing 3s and 4s exposures of scenes to which you know you didn't bring your tripod.

It shouldn't come as a surprise to anyone who's kept an eye on current smartphone cameras that these two models take great photos in low light. And they do that in their respective auto modes already, before resorting to extra long exposure trickery.

When there's some light to work with, they will both capture well exposed shots with decent detail and good control over noise. The Mate's shots do tend to be a little darker and more contrasty, while the Pixel has better dynamic range. The Mate also applies significant sharpening, going overboard even, while the Pixel's photos are softer but more natural looking.

The Pixel has a signature bluish tint to white light sources and it also tends to render bright lights with halos, while the Mate's have distinctly better edge definition. Generally speaking, neither has issues with losing saturation in low light.

It's in well lit scenes like these that you stand to gain little by going for the night modes. If anything, on the Mate you're bound to introduce motion blur and a bit of a water-color effect without any meaningful benefits.

If it's darker, the Pixel's regular images can end up significantly underexposed, as it refuses to crank up the sensitivity higher than about ISO5200. Night Sight is there to help with that, pulling up the shadows. The auto shots are noisier, while Night sight cleans them up nicely. What's not so great is the general tendency to strongly whiten up light sources that are considerably warmer in reality.

The Mate's auto mode shots aren't as dark - it'll happily push the ISO to 12,800 and even 51,200. Hence, the overall difference in exposure between auto and night mode isn't as striking. Some fine detail does tend to be wiped away in the Night mode shots, but the shadows brighten up and noise level drop some.

We went into the darkest corner of a bar (all in the name of science, of course) to see how the phones handle the great indoors. Again, in the regular Camera mode, you can barely see anything in the Pixel's photos, while the Mate works decently. The Pixel's Night Sight, however, does miracles and we'd opt for that in a heartbeat for our pub shots. Oddly, here it renders the scene warmer than it looks in reality.

The Pixel's eagerness to whiten up images in Night Sight is particularly apparent in one of the test scenes we did to compare handheld vs. tripod behavior. The incandescent lamp throws a warm amber light on the white wall, and to our eyes the scene does look warm and amber. Then again, the wall is, in fact, white.

Additionally, the Pixel has blown out the light bulb entirely, be it in the auto mode or the night mode. Meanwhile, in the Mate's rendition, you can see the filament - it's that well defined. Then again, it's an overall darker exposure, if only slightly so. Neither phone has done anything to bring up the deepest shadows in the left of the frame.

There's no 'almost' bit anymore when it comes to the filament definition in the Mate 20 Pro's shot when supported on a tripod - it's super detailed. Now if only the photo in the auto mode was in focus. In any case, the Mate has more than doubled the shutter speed when compared to the hand-held photo (9.0s vs. 4.0s), and even if those values aren't strictly true, it does apparently recognize it's being stable, and adjusts parameters to make use of that. The Pixel doesn't appear to care.

The second scene where we used a tripod to prop up the phones further proved the Pixel doesn't differentiate between hand-held and tripod-mounted shooting producing essentially identical results.

On the other hand, the Mate clearly benefits from the extra support and produces a crisper shot on the tripod with none of the water color effects we've observed in some of its hand-held samples.

Night modes are awesome. We've been enjoying the leaps in computational photography brought about by the latest generations of high-end phones, and night modes have us particularly impressed. Being able to gather a lot of light when there isn't much available means a long exposure and long exposures without keeping the camera absolutely still have been impossible until recently.

Both phones are capable of extracting detail in the darkness where are eyes didn't necessarily see any. Both will produce better images in their night modes that in their camera modes when the conditions are right. Better yet, both take pretty great low-light shots in their auto modes already, even before you engage the dedicated modes. 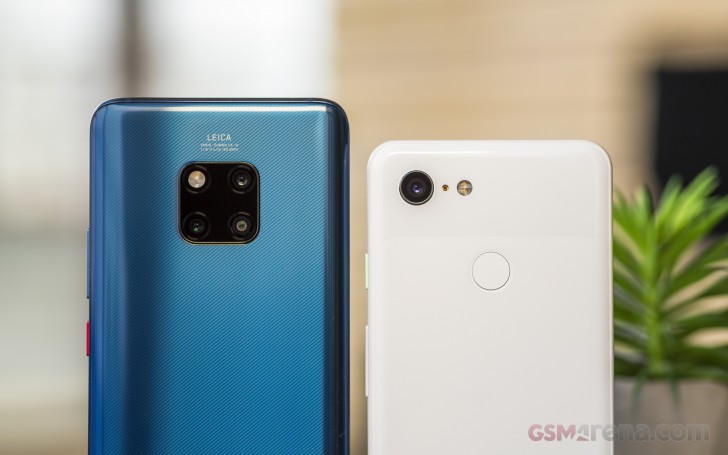 The Pixel tends to whiten up warmly lit scenes, which we feel does rob them of their ambience. You could argue that it's aiming for a more neutral rendition, and you could have a point. On a positive note, it will warp up scenes with people in them to make for a more pleasing and lively look, which is nice.

The Mate isn't quite as good at that, but on the other hand it will handle incandescent lights better and preserve the vibe of the scene. It also generally captures bright light sources with better edge definition, compared to the Pixel's halo-y neon signs.

In any case, we'll now be heading to the pub with more confidence knowing that we'll be getting nice photos without much effort. Yay, night mode!