A translated spec sheet has surfaced on Twitter thanks to reliable leakster Roland Quandt a.k.a. @rquandt. Let’s take a look at what the smaller Pixel 3a has to offer. Apparently, the spec sheet is translated from another source.

For starters, we already knew that Pixel 3a was going to come with a 5.6-inch display when we saw that spec appear on the retail packaging. Now we know that the display will have Full HD+ (1080p) resolution and an 18:9 aspect ratio. We’re also glad to learn the display is OLED so always-on mode will be a compatible feature.

There’s a 3,000 mAh battery on-board and the phone is powered by a Snapdragon 670 CPU; This SoC is paired with 4GB of RAM. Here we also see the phone’s body will be built from polycarbonate, which keeps the cost of the phone down. We wonder how the phone will feel in-hand.

The camera details are where this gets interesting. The main camera is a 12.2 MP sensor with dual pixel autofocus and 1.4 micron-sized pixels and feature a lens with an f/1.8 aperture – identical to what is offered on the Pixel 3. We are excited to see how the photos compare with the Pixel 3. The selfie camera is also identical: 8MP with f/2.0. Of course, there is no secondary wide camera like on the Pixel 3 and 3 XL. 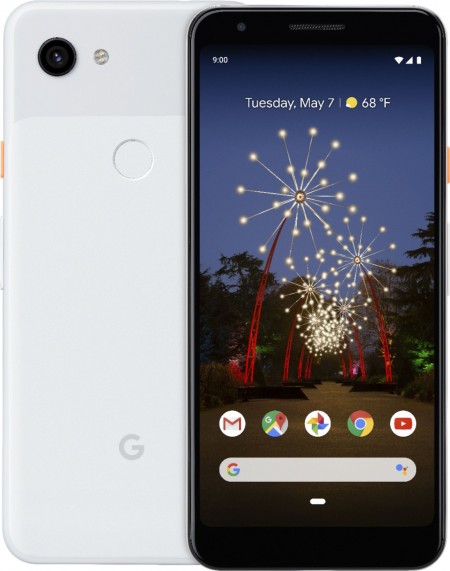 Leaked render of Google Pixel 3a

Video recording will be limited to 4K @ 30fps and the front camera to 1080p @ 30fps. Active Edge will also be a feature embedded into the body. This is the feature developed by HTC that lets you squeeze the phone’s sides to summon Google Assistant. The phone is compatible with USB-Power Delivery 2.0 for 18W quick charge.

Other connectivity options include a 3.5mm headphone jack, 5GHz Wi-Fi ac support, up to Cat. 11 download speeds of 600Mbps (theoretical), Bluetooth 5.0, and NFC. We’re also even seeing stereo speakers on the midrange 3a.

So far, we like what we see. The Pixel 3a appears to have an identical feature set to the more expensive Pixel 3 and 3 XL. Of course, the main differences are the lower cost CPU and materials, as well as the lack of a second front-camera. The Pixel 3a is rumored to have a starting price of $399, which would be an excellent price point as long as it can deliver great battery life and a comparable camera experience to the Pixel 3.

In fairness, this is good for Google to do. Listen, people keep bashing the Pixels and many of it is warranted considering they do have problems. But if they continue to flop in sales, we may never see the next Pixels around for long. We will al...

Nokia X71 has this beat on everything, but the CPU.