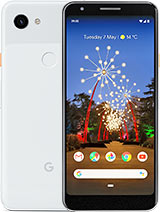 Gsmarena tests are very spot on. This phone is a battery champ.

Has a headphone jack? Are you kidding me? How come the cheap phone has more features than the expensive one? So what is the point of paying 960$ for the Pixel 3 XL now? This is BS!

The 3a XL is just the right size, the right weight and contains the right battery size. The average person doesn't need 3 cameras, just a GOOD camera and this fits the bill. The rear fingerprint sensor is fast and well placed, who needs under screen sensors, they are a gimmick. This phone is fast, smooth and has software simplicity for everyone.

I have the OG pixel xl and was thinking about getting the pixel 3a any thoughts on the matter?

Evan Unggaran, 12 May 2019here's why Pixel 2 XL is a better buy: - similar price (it is even cheaper in some countries... moreDisclaimer: I like all these phones, but my opinions may help people decide which one they would like best. I own both the Pixel 2 Xl and Pixel 3a XL. I also owned the Pixel XL.

I disagree with some of your points.
-Processor SD 670 (high end midrange based on newer cores than the SD 835) The 670 has some advantages, the 835 has more CPU power. It's actually a pretty close fight in benchmarks and side by side in my use. I would not base my decision on these two phones based on the SoC. Toss up here.
- Camera. The 3a XL has the Pixel 3 camera hardware and software. It's better than the 2 XL. Now the 2 XL is still very good, and in some cases may process photos marginally faster, but not by much. 3a XL slight advantage. 835 vs 670 here is mostly irrelevant
- Speakers. Both good, 2 XL has front facing dual, 3a Xl has one front and one bottom firing. the 2 XL wins this, but don't sleep on the 3a XL here, its actually pretty good. Having one speaker bottom firing isn't as bad as it sounds (pun intended)
-Screen Quality. Here i disagree with you. The 2 XL screen is "poop", and I'm being kind when I say that. If you don't believe me, google it. Screen burn in, blue shift, graininess, black smear and black crush. It was made by LG and those panels don't hold a candle to what samsung makes. The 3a XL is way better. It's lower res, but at over 400 ppi, the truth is it really doesn't matter. It's still full HD and it just looks better whether at full brightness or at lower brightness levels. This is THE reason I am switching to the 3a XL as my daily driver phone. Winner here is 3a XL hands down.
-Build quality. Sure the 2 XL has more expensive raw materials. The 3a XL does look pretty slick, definitely not budget looking. If this matters to you, edge 2 XL.
-Battery life. Both great, can't go wrong with either. 3a XL should be better, but the 2 XL has awesome battery life.
-Heaphone jack. 3a XL,. Lots of people would pay $ to snap their fingers and put one on a 2 XL. i know I would.
-Updates. The 3a XL wins. It'll get 1.5 years more updates, including security updates. Also has a fancy shmancy Titan M security chip . If you're a journalist in a country with an authoritarian regime in charge. I'd lean towards the 3a.

If you need some more superior processor, better build quality, better camera, with great aesthetic, but doesn't really care about software updates, go for 2 XL and its cheaper that the 3a XL--if you buying second handed.

tantonio, 14 May 2019Performance side does not affect. Autonomy side, 3A XL forever. In addition, one more year wi... moreOkay thanks for your suggestions because here in my country Pixel 2 XL and 3a XL are almost the same price.

Leopard, 14 May 2019Tell me should I go to Pixel 3a XL or the 2 XL which is Sd835 over the Sd670? Which one is better?Performance side does not affect. Autonomy side, 3A XL forever.
In addition, one more year will be supported for updates

Evan Unggaran, 12 May 2019here's why Pixel 2 XL is a better buy: - similar price (it is even cheaper in some countries... moreAccording to reviews of the Pixel 3a/XL, the quality is almost the same as the Pixel 3/XL, the rendering, the post processing... hard to notice the differences, but of course the launch time of the camera is a tad slower and the images processing as well that's because the Pixel 3a SoC, but nothing dramatic.

Anonymous, 11 May 2019Nokia figured this out a few years ago. That's why I bought a 7 plus for $375Yeah great camera on your Nokia, not


I SEE NO REASON TO BUY THE 3a/3a XL.
that headphone jack though, did any of you really choose jack over those reasons I lists above?

If Google decide to launch a 128GB version I would consider to getting it.

Anonymous, 10 May 2019I think both use LG oled. Samsung makes the display

Nokia figured this out a few years ago. That's why I bought a 7 plus for $375

I think both use LG oled.

Ahmed, 08 May 2019This is not a phone. This is a time machine that takes you back to 2017. Google, please start... morethats why they have the 3 and 3xl (and pixel 4 later this year) for performance. this one is for people that want a really good camera and dont care for performance.

When it comes to Android, there's no good alternative to Google. And I'm ready to pay more for mid-range processor to get Google top-tier support, updates and camera. Because I don't want to struggle with lags, bugs and other surprises from "better" Xiaomi.

Total of 215 user reviews and opinions for Google Pixel 3a XL.
ADVERTISEMENTS